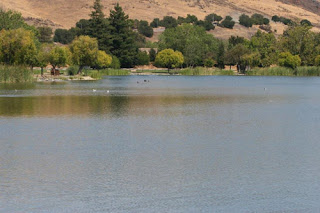 Deanna Barth, one of our lead wildlife responders, takes her position as a member of our response team quite seriously. Just about every Friday afternoon, after work, she makes her rounds, checking local 'hot spots', looking for injured wildlife.

With camera, binoculars and bag of grain in hand, I began my Friday afternoon scavenger hunt. This time, I chose Almaden Lake Park in San Jose.

It was a gorgeous 93 degrees out as I slowly strolled around the lake, stopping at each group of birds to do a 'leg check'.

During my walk I spotted some fishing line glimmering in the bright sun. Loose line can be harmful to wildlife, so I cut it away from the rock and pocketed it.

All the resident waterfowl, which included Canada geese, egrets, great blue herons, coots, and mallards, appeared to be in great shape, so I packed up and headed over to Hellyer Park.

I found the lake overflowing with Canada geese. Just a quick rustle of my bag of grain, and they all came out of the water  and towards me. 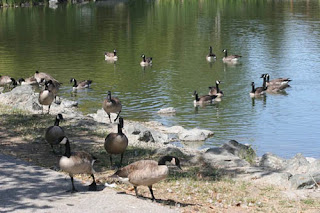 I don't really feed the waterfowl, I just make them think I'm going to. For one thing, I don't want to add to their habituation to humans, which can only get them into trouble. I only toss handfuls when I'm rescuing an individual.

I walked around the huge flock for about 20 minutes, carefully inspecting each bird as it foraged on grass. No injuries! I also picked up several deflated Birthday balloons.

Heading towards home, I stopped in Morgan Hill to check the Community Park waterfowl. To my surprise, there were no geese, only a few odd ducks, and an enormous mess of plastic bread bags, soda cans and cereal boxes. I put on my gloves and began cleaning it up.

As I was picking up the garbage, I realized I was being watched by park goers, but never expected the thunderous applause I received when I deposited the trash in the garbage bin. I responded with a  smile and a wave. But, as I walked off I couldn’t help but think that anyone in the park could have picked up the mess just as easily as I had.

Although I chose to spend three hours walking around parks today, it only took me 10 minutes to make a significant difference.

Most of us live or work near a community park or lake. Just think what an impact you could have if you took just a few minutes each week to look for injured animals and pick up trash along the way. Whether it’s a brisk walk on your lunch hour, a nice evening stroll, or part of your weekend plans, you can have a positive impact on your community and its wildlife.

Every wildlife rescue begins with the person who first discovers an animal in distress. With luck, they reach someone willing and experienced to help.

Recently, Deanna received an email about an injured gull at Pinto Lake. The person knew Deanna made weekly rounds, so they thought to pass on the information. The next day, Deanna was there to check it out.

Sure enough, there was a gull in trouble. Deanna's 6 year-old daughter, Kaia - a wildlife-rescuer-in-training, spotted it first!

The gull appeared weak and in severe pain from a wing injury.

Deanna gently netted the gull and delivered it to Wildlife Center of Silicon Valley. Unfortunately it had a fractured wrist and could not be saved.

Many thanks to Kraig C. for reaching out for help for this poor bird.

Quite often, we receive reports of injured animals that are still very mobile, like the recent call about a brown pelican, entangled in fishing gear, near Antioch, CA. We do our best to send responders quickly, even so, it usually means searching a vast area when we're looking for a flighted bird. 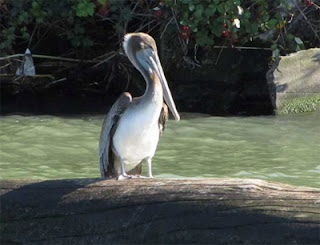 Akira So, also one of our volunteer wildlife responders, does an outstanding job of canvassing for injured animals, and a superb job of documenting his findings.

Akira generously gave up his Friday to search for pelicans in distress. Here's his account of the areas he covered. 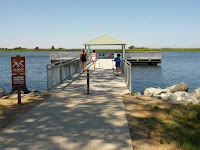 1. Shoreline between "Humphrey's On the Delta" to Amtrak Station/Riverview Lodge.

One juvenile brown pelican found near the public fishing pier by Riverview Lodge/Amtrak Station. Not tangled in fishing gear and appeared healthy. 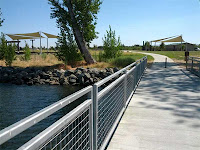 Suggested by bait shop. One juvenile brown pelican found at the end of the pier, being almost hand-fed by a little kid. However found to be not tangled in fishing gear.

Talked to office manager, who showed me of a picture of a pelican found in the area tangled in fishing line, back in March.

MANY THANKS TO OUR DEDICATED VOLUNTEERS, AKIRA AND DEANNA, FOR SO GENEROUSLY GIVING THEIR TIME TO HELP OUR WILDLIFE AND ENVIRONMENT.

INSPIRATION FOR US ALL!
To become a volunteer wildlife responder please send in an application and waiver to rebecca@wildrescue.org.