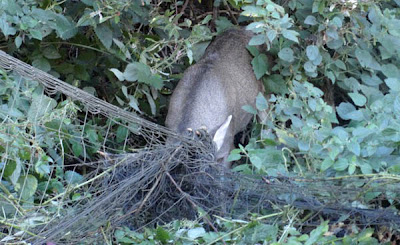 Day before yesterday, we were forwarded an emergency call about a large deer entangled in netting - soccer netting. The animal had been stuck for a few hours, maybe longer.

In California, deer are classified as big game mammals and handling them is strictly prohibited under Title 14 without authorization by the Department of Fish and Game(Wildlife), and rightly so. Like all game species, they are extremely difficult and dangerous to handle. Dangerous to themselves as well as handlers.

We dispatched a team to, first and foremost, keep people away from the animal. En route, our team notified the Department and received authorization to initiate a rescue if they felt it was safe to do so. 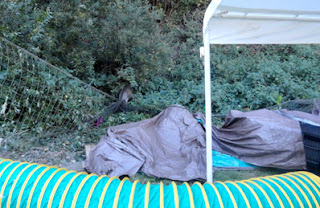 Once on scene, the team found a good sized buck with its antlers horribly tangled in netting. It had backed away from the soccer field and into some brambles.

The team cleared the area, making room to work safely.

Using a long-handled hook, Duane tested the animal's responsiveness and to see if there was any chance of slipping the material from the buck's antlers but netting was wound tight around its rack. The team was able to secure the deer, somewhat, but they needed help. 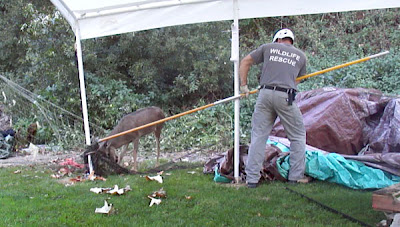 They called local game wardens to assist. Two wardens arrived within minutes and helped subdue the frightened animal. During the process, the deer's eyes were covered to reduce visual stressors, and its body was sprayed down to help prevent capture myopathy.

One of the greatest risk to the wild animals we try to help, is their fright. Their innate fear of us can kill them. Especially prey species.

When an animal is placed in what it perceives to be a life and death situation, where it must flee of fight for its life - a series of chemical changes occur, starting with the release of adrenaline into the bloodstream. The animal's heart rate increases, breathing accelerates, and blood is diverted to the large muscles to help the animal escape danger.

In short bursts, these changes in an animal's metabolism can be beneficial to its survival, but extreme and prolonged exertion can be fatal.

Simply put, while under pursuit, restraint, or severe stress, if an animal's body can't supply enough oxygen to its muscles, the muscles start to die.

Onset of capture myopathy can be sudden, within minutes, or over days, even weeks after an event, and there is no cure. If the animal survives, residual signs may last months. With this in mind, even though the buck was freed and it eventually made its way to the woods, its survival is questionable.

Today, we received another call about an entangled buck. This one was caught on a hammock in the Bonny Doon area. Unfortunately rescuers arrived too late. The buck died as a result of fighting so long and so hard to get free.

For coastal populations of deer in California, October is typically the beginning of their rut, or breeding season. This could explain the recent hammock incident. Perhaps the buck tried rubbing his antlers on the hammock, or maybe it was pursuing a  doe and happened through the resident's backyard when it got hung up on the material.

As for the buck on the soccer field - there had been a huge fireworks display the night before at Seacliff State Beach, about half a mile from the field. The explosions could certainly have been a factor.

In conclusion, these two bucks were harmed by manmade objects. For the safety of wildlife around your homes, please take a moment to check your yard for things that animals might get tangled up in, like netting, webbed material, string or rope.

A HUGE THANK YOU TO THE DEPARTMENT OF FISH AND GAME WARDENS WHO ASSISTED WITH THE RESCUE OF THE BUCK!!!