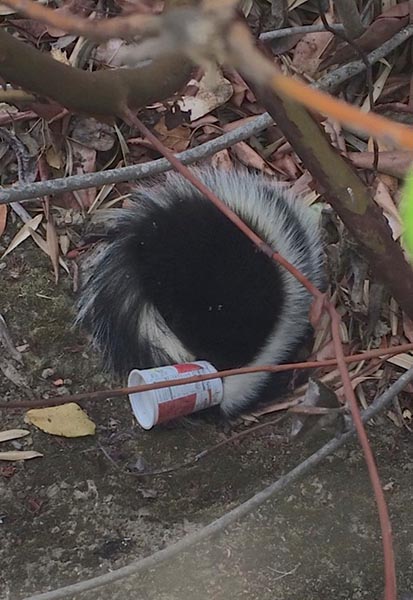 We did it! Thanks to everyone who signed our General Mills/Yoplait petition, we reached our initial goal of 100,000 signatures!

It all started just 6 weeks ago. After rescuing a skunk with its head caught in a Yoplait yogurt cup, Rebecca Dmytryk, founder and CEO of Wildlife Emergency Services, started a petition on Change.org, demanding General Mills change its trademarked cup to make it safer for wildlife.

The Yoplait cup issue is not a new phenomenon. The “vercon” shaped cup was introduced 35 years ago, and has been taking a toll on wildlife ever since - and General Mills has been aware of it!

In 1997, the Animal Protection Institute (API) and Humane Society of the United States (HSUS) joined forces to research the issue. They found that the problem is unique to the United States because other countries manufacture their own containers that don’t have the inside lip.

They also came up with some statistics on the number of animals that might be harmed each year. Based on these findings, it can be estimated that, nationwide, thousands of animals are killed or injured by Yoplait containers each year.

In response to international media coverage and public outcry, in the late 1990's, General Mills made a superficial change to the container, adding a warning to the label that urges consumers to help protect wildlife by crushing the cup before disposing of it.

That was not enough.

It is time for General Mills to change or get rid of the design, once and for all.

If you haven't already signed the petition, do it now, HERE.

In the meantime, we are working on getting more publicity, hoping for more celebrity involvement, and expecting to hear from executives of General Mills at some point.