Hawk rescued from inside a Home Depot 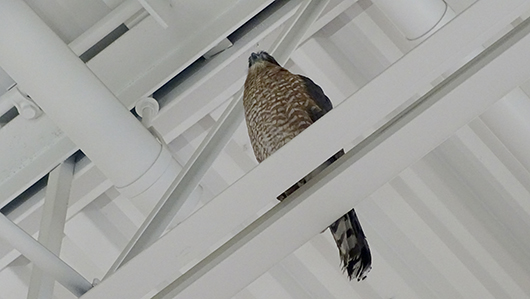 On October 10th we were notified of a hawk inside the Home Depot off 41st in Capitola. Apparently, the hawk was going after a small bird when it flew into the store through one of the large roll-up doors, then made its way into the main retail area where it stayed high, flying through and between a matrix of metal beams and framework.

Unfortunately, the Cooper's hawk injured itself in a collision with one of the many obstacles at, quite possible one of the fans.

When we arrived, the bird was able to fly, but its right leg was badly damaged. The bird would not put any weight on it - the leg just dangled at its side. 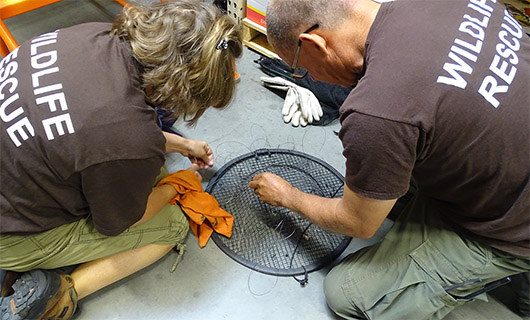 The injury complicated matters. Normally, a healthy accipiter would be quick to land on a bal-chatri - a trap that uses live prey to lure predatory birds, but this hawk was in severe pain and did not show much interest in the trap we placed.

That night, after the store closed at 8:00 pm, the store manager, Doug, helped us darken areas of the building so we could use spotlights to help conceal our approach with nets, but the bird was too flighty.

The next day, rescuers from Native Animal Rescue also tried luring the bird, but, again, the hawk showed little interest.

Finally, on Wednesday, the bird landed on the bal-chatri. We waited, watching from afar for a sign that it was caught, but it took off back to its perch above the indoor plant section where there was a source of water at ground level.

Then, on Thursday afternoon, we placed a mouse and a finch in the bal-chatri and set the trap in the same spot as the day before. With the shopping isles, again, blocked off and the garden door closed, we waited.

Within minutes the hawk was on the trap!

Again, we waited for the sign it was caught. Finally - there it was, the bird tried to lift off but couldn't  - we could only hope it wasn't doing more damage to its leg.

We rushed the trap, got control of the bird, and removed the nooses from its legs. It was then quickly boxed and transported minutes away to Native Animal Rescue.

The Button Quail, Mouse, and Finch were certainly stressed but returned home, unharmed.


THANK YOU HOME DEPOT MANAGERS FOR OUTSTANDING
ASSISTANCE IN HELPING US RESCUE THE INJURED HAWK!

THANK YOU MARY DALTON AND
THE NATIVE ANIMAL RESCUE TEAM!

UPDATE: On 10-15-15 the hawk was seen by an avian veterinarian who believes the leg can be mended.