To Kill a Mockingbird - death of nature by cat 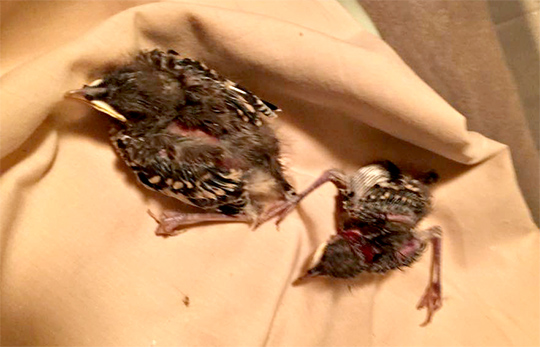 Free-roaming cats. It's a serious issue. Those who don't think free-roaming cats, owned or feral, have an impact on wild populations, have blinders on.
Yesterday, two nestling mockingbirds were severely injured by a cat. The chicks were taken away to a wildlife hospital, leaving behind two very traumatized parent birds, now at a loss.
The two casualties, near fledging age, represent about a three-month investment by the parents - establishing territory, courting, pairing, mating, nest-building - the male creating the twig frame with the female lining the interior with soft grasses and roots.
The female mockingbird laid 3-5 pale blue speckled eggs, and, after about 2 weeks, the eggs hatched and the parents worked, non-stop, from twilight to dusk, providing food for their chicks.
Another couple of weeks and their brood would have fledged, adding to their species' declining population... but that didn't happen. Instead, their nest was destroyed and their entire brood was killed or injured because of a free-roaming cat - because we allow this invasive predator to be at large, unregulated, like no other. This has got to stop!
We must advocate for the protection of wildlife from domestic cats through state policies, regulations, statutes and local government ordinances. It is time we put cats in their place.
Rebecca Dmytryk