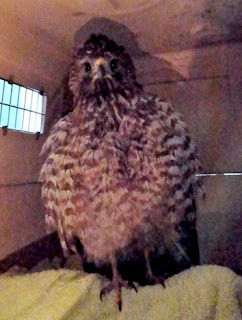 Last night, we received a call from one of our local game wardens. He'd responded to an incident involving a young red-shouldered hawk. With no wildlife hospital open to receive the injured bird, the warden was kind enough to transport it to WildRescue's headquarters on the central coast.


Upon arrival, we did not examine the bird, as this would have subjected it to unnecessary stress from additional handling. Injured wild animals are exhausted from trauma and their exposure to predators - humans. Unless they are suffering an immediately life-threatening condition, they should be provided a dark, quiet place to rest. This is true for animals first admitted into a wildlife hospital, as well.


Unfortunately, we did have to disturb the bird momentarily. It needed to be transferred out of a wire birdcage (provided by the finder), into more suitable housing. Wild birds should never be confined in wire caging - the wire can damage their feathers. During the transfer, we noted a patch of bloodied feathers on the bird's chest.


Bright and early Tuesday morning, the young hawk was transported to Wildlife Center of Silicon Valley by one of our lead responders, Ron Eby. Thank you Ron!


By afternoon, we received word about the bird's condition. He was found to be in a weakened state, thin, and not stable enough for radiographs. A physical examination, however, did reveal a puncture - most likely a gunshot wound. The bird was placed on antibiotics and pain medication.


We want to thank Department of Fish and Game Warden Jones for calling on us for help. We also want to thank Wildlife Center of Silicon Valley, once again, for their immediate and expert assistance with this critically wounded animal.

UPDATE: On Thursday, radiographs confirmed the bird was shot. A small pellet was found lodged in its chest.
It is illegal to shoot birds of prey. This case is under investigation by authorities. Should the person(s) responsible not come forward, WildRescue is preparing to launch a reward campaign. Stay tuned.