Today, received a call today about an injured Canada goose in one of the parking lots at Apple Inc. in Cupertino, CA. According to the RP, it had been there for a week. No one had come to its rescue.


We alerted our responders. Sammarye, in Sunnyvale, was quick to reply. She met Rebecca on scene. 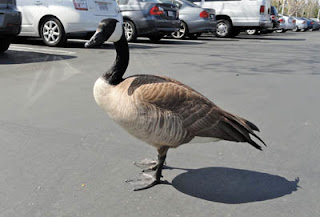 The goose appeared to have a swollen leg, but was still flighted, although weak. Rebecca first tried coaxing the bird close, but it was too wary. Next, the team tried a single snare, but that didn't work well, so they decided to try the Drive By.

They placed a few handfuls of grain to preoccupy the goose. With Samm at the wheel and Rebecca crouched inside the back of the van with both doors open, they made a couple of passes. With each pass, the goose seemed to get a little more comfortable with the vehicle.
On the third pass, Rebecca lunged, bagging the goose in a large hoop net. Samm stopped the immediately and helped process the large bird from the net and into a crate. 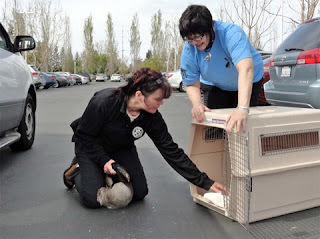 The bird was transported to the Wildlife Center of Silicon Valley for treatment.


UPDATE: According to WCSV, the goose was dehydrated and notably lethargic. Her slight wing droop leads them to suspect lead poisoning. They expect lab results early next week.

Hahaha...I've done that at a golf course from a golf cart too=)