On June 5, tree trimmers working on a large eucalyptus tree in a wooded neighborhood of Atherton accidentally trimmed a branch that contained a hidden Red-shouldered Hawk nest. Thankfully, both of the nestlings survived the fall unharmed and the concerned foreman of the trimming company immediately took them to the Peninsula Humane Society Wildlife Care Center. 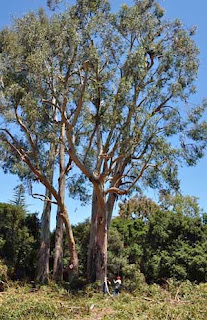 Patrick Hogan, Wildlife Care Center Supervisor and lead rehabilitator determined that both chicks were healthy and being well cared for by the parents and were good candidates for re-nesting.

The next morning, WildRescue responders, Jeff and Jessica, picked up the chicks and coordinated with the tree trimmers, who agreed to have their team, including their tree climber, Cesar, return to the site to assist with the re-nesting. This is their account:


Soon after we arrived at the property, we heard the distinctive "keeyur...keeyur...keeyur" of an adult Red-shouldered Hawk, and were able to pick out two adult hawks as they moved from tree to tree. 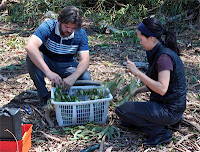 As we worked on putting the finishing touches on the nest basket, the babies began doing their own alarm calls, which were responded to by the adults. So, we knew the parents were in the area, aware of their young, and we just needed to handle the logistics of getting them back in the tree.

Unfortunately, the entire branch that held the original nest had been cut down, and the lower area of the tree near that location was very exposed after the trimming. We did notice an old crow's nest very high up in the branches in a good spot (our thinking was that if birds approximately the same size as the Red-shoulders had used that location, then the hawks would likely be comfortable there as well), but this appeared to be well out of reach of anything without wings... 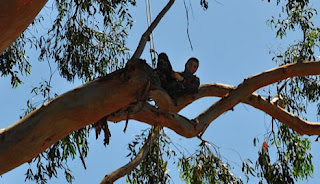 As it turns out, while those of us on the ground caucused to decide on a "Plan B" location, Cesar took it upon himself to climb up to the crow's nest. Just seeing him so high up was not for the faint of heart, but he took the opportunity to take a quick after-lunch nap in the branches while we were finishing up the nest basket! 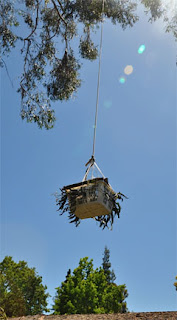 We quickly raised the basket to Cesar on a rope, and he secured it to the tree on top of the old crow's nest and deposited both nestlings. We could see from below that the babies were active exploring their new nest and hear them calling, but there was no sign of the parents. We assumed they were watching the entire scene unfold from a hidden location nearby, but were waiting for a little less human attention before they went back to the nest.


Sure enough, after a lunch break of an hour or so we returned to the location and saw one of the parents fly into the nest, ensuring that the family reunion was complete.
Interestingly, at this point, the trimmers were actively working on the ground mulching, but the hawks seemed unconcerned. This was a good demonstration of a fact that any birder who has tried to stop on the side of a busy road to observe a raptor, only to watch it fly away, knows to be true; many birds have become accustomed to "normal" human activities (regardless of how loud or intrusive they are), but are still keenly aware of being observed by humans, who they view as predators.
...
Many thanks to Norman, Herman and especially Cesar for his death-defying tree-climbing skills. Without their time and effort, this would not have been possible!

Also, many, many thanks to Jeff and Jessica for giving up their day to renest these babies, and to Patrick and all of the wildlife carers at Peninsula Humane Society's Wildlife Care Center for their time and effort!