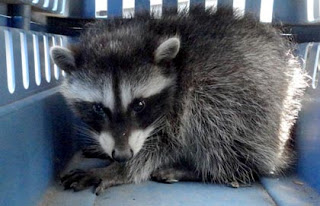 Santa Cruz, CA. Three raccoon cubs were orphaned this week when their mother was trapped and taken away. Management of the inn where the raccoon had set up residency, captured the animal using a 'humane' trap and dumped her a few miles up the road.

They thought they were doing the right thing, until they found her babies, and they had no idea they were breaking the law.

Duane and Rebecca responded as part of their Humane Pest Control business. When they arrived, only two cubs were found, despite an extensive search. The youngsters had crawled out of a hole in the wall and were hiding in a patch of English ivy.

You might want to turn the volume down before viewing.

Raccoons are extremely intelligent animals and, as you can see from the video, they are very hard to hold on to - they have loose skin and are known to 'turn around' in their skin. Originally thought to be related to bears, the raccoon was later placed in its own genus, Procyon (meaning, before-the-dog).
The babies were taken to Native Animal Rescue and the inn's maintenance person was instructed to watch out for the remaining cub and the possible return of the mother. If we can, we'll reunite the family, but we fear the mother was killed trying to make it back to her babies.

Relocation of wildlife is prohibited in California, and for good reason. It chances the spread  of disease among wild populations, and relocated animals usually end up dead trying to return home.

For those experiencing conflicts with wildlife, the animals may seem like they are the problem, but they're really not - they are a symptom. Treat the problem, and the symptom goes away! That's why trapping is never really a sound answer - it doesn't address the problem.

Thankfully, in State of California, anyone wanting to trap wildlife must adhere to specific regulations - even landowners looking to rid their property of pesky animals using a 'humane' box trap.

Included in the regulations is the requirement that the trap be clearly marked with an identifying number provided by the Department of Fish and Game.

There is also a requirement for written authorization from homeowners within 150 yards (that's a football field-and-a-half) of the proposed trap site. This trap placement rule protects pets as well as the neighbors' rights to a say in what happens to surrounding wildlife.

Another, sometimes overlooked condition for trapping 'pest' wildlife, is the need to show cause - there must be proof that the animal is a threat to a person or property. People are not allowed to just indiscriminately trap and kill native animals.