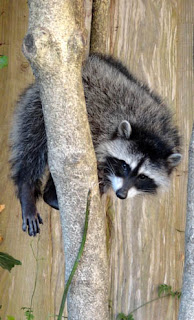 Early this morning we responded to a call from a resident of Santa Cruz. She sees a family of raccoons in her yard almost nightly, but last night she heard crying, and found one of the youngsters stuck in a tree.

The poor thing was caught at its waist between two vertical trunks. Its struggling caused it to slip lower, and lower, wedging it even more.

On approach, we saw the raccoon had use of its tail and back legs, and it had a great deal of fight left. Good signs!

Once the animal was freed, we watched it for a few minutes, hoping it would take off, but it was apparently weak in the hind quarters.


The youngster was transported to Native Animal Rescue for evaluation. With luck, we can return it to its family in a few days.

UPDATE 8/16/12: The raccoon is still in care, being treated for weakness in its back legs.