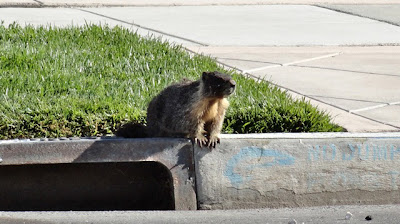 On Monday afternoon, we received word of an unusually large rodent-like animal emerging from storm drains near Schallenberger Elementary School in the Willow Glen neighborhood of San Jose.

Residents were able to email images, helping us identify it as a yellow-bellied marmot.

Marmots are the largest of the ground-squirrel tribe. They are found in higher elevations, above 6,000 feet. In California, yellow-bellied marmots, affectionately called 'whistle pigs' for their shrill alarm calls and portly build, inhabit the grasslands and alpine meadows of the Sierra Nevada, Cascades, and White Mountains.

So, what's a marmot doing in San Jose? We believe it 'hitchhiked' in the engine block of a vehicle that recently returned from the mountains. Marmots have an affinity for antifreeze and are known to get up into engine blocks looking for access to the sweet-tasting but toxic fluid.

Rebecca Dmytryk, was on scene by 2:00 PM on Tuesday. Here is her account of the rescue: 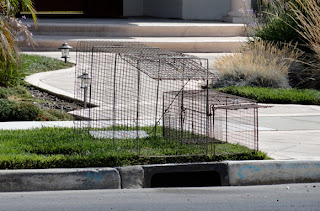 There was no sign of the marmot at the storm drain where it had been seen earlier in the day, but a fellow passing by had just spotted it a block away.

As I pulled up to the intersection, I saw it. Grizzled fur, long body outstretched over the curb, gnawing on a patch of manicured grass.

I set a medium-sized cage trap. Then a larger one. Then both. The marmot showed no interest in the freshly sliced apple and carrot being offered, only grass.

I called the City of San Jose Department of Transportation for help to see if they could assist in driving the animal out of the storm drain.

At about 5:30, Anthony Friebel from San Jose DOT arrived. He knew, right away, which drain the animal was using. Thankfully, we were dealing with a single lateral (Don't I sound like I know what I'm talking about?).
Anthony was great. He had animal handling experience from his work with livestock, so he was totally up for the task at hand.


While I secured a large, open-ended hoop net over the drain, Anthony pieced together segments of flexible rods to feed through the pipe. He fixed a large plastic Gatorade bottle to the leading end to keep the animal from squeezing past.


At one point we ran out of rods. Anthony called on his co-workers, Frank and Joe, who brought more extensions.

There was nothing else to do but slowly pull the line back out and hope the animal would come with it.

Anthony held a small hoop net in place as the line was drawn up. Suddenly, out jumped the marmot, into the net, but the bag wasn't deep enough for him to twist closed (Awesome, that he knew to do that!), so it squirmed out of the net and into an adjacent pipe. A shorter one.

The men quickly blocked its escape, I secured the open-ended net over the new catch basin, and we started again.

It wasn't long before they ran into a blockage of some sort. When they started to pull the rods back, the marmot shot from the pipe and was netted for a second time. Joe used his gloved hands to secure the wriggly creature until it could be transferred to a cage. Check out the video, below.

It was 7:45 PM when Rebecca delivered the marmot to staff at the Wildlife Center of Silicon Valley, where it will be cared for until we figure out where it can be released. In the State of California, relocation of wildlife is prohibited without authorization, and for many good reasons. For one, relocation can spread disease between wild populations.

Earlier, Rebecca contacted Lake Tahoe Wildlife Care Center. Its founders, Cheryl and Tom Millham, who have been rehabilitating wildlife since the late 1970's, generously offered to get the animal back into suitable marmot territory. The California Department of Fish and Game approved the idea, but we'll keep that as a backup plan - ideally, we want to find its home territory.
Thankfully, the marmot's story received a good amount of coverage through the news media and by morning we had a strong lead from a Willow Glen resident whose father frequents Yosemite.

William Charlson, a retired Santa Clara County Park supervisor, travels to and from Yosemite just about every week, stopping at his daughter's home on Cottle Avenue, 200 yards from where the animal was originally spotted. His most recent visit was Sunday evening - the marmot was first reported Monday morning.

Charlson runs a bed and breakfast in Groveland, just outside of Yosemite National Park. He built Lillaskog, which means "little forest" in Swedish, by hand, using salvaged logs from a forest fire. Check out his interesting story, HERE. He informed us that on Saturday, there had been a number of trips from his inn to Tuolumne Meadows, where marmots are abundant, and he suspects that's where the marmot came from.
Back at the wildlife center, the marmot was weighed and examined. The female marmot was underweight. She needs to bulk up before going anywhere. There's no time for delay, however. Marmots hibernate through winter, so she'll need to get into the mountains in time to find a suitable burrow.

UPDATE: We spoke with a yellow-bellied marmot researcher who said that even if we do not find her exact meadow, this is a good time to introduce a marmot into a foreign colony - they will not harm her. The marmot is being transported to Tuolumne Meadows on Sunday, August 26th where she will be released. Chip-in to cover gas, HERE.
THANK YOU WILLIAM FOR PROVIDING LODGING AT LILLASKOG FOR OUR TRANSPORTER!!!
THANK YOU TO EVERYONE WHO HELPED WITH THIS RESCUE AND RELEASE!!!

Great job, guys. I've often wondered why the makers of antifreeze can't add something to it to make it taste bad since many animals die each year as a result of ingesting it. Do you know of any efforts in this regard?