After walking around Monterey’s historic Fisherman’s Wharf and only seeing four pelicans, I decided to head over to nearby Lake El Estero to check out the resident waterfowl for injuries.

I quickly spotted a large flock of Canada geese, gulls and coots in the water. I grabbed my bag of Fritos and shook it vigorously and, just as expected, the birds quickly made their way across the lake.

I had yet to toss any chips, yet they began to encircle my feet, the gulls loudly making their presence known. I looked over each bird - scanning legs and wings for fishing line or other ailments. All of the birds looked in good shape except for a single American coot. 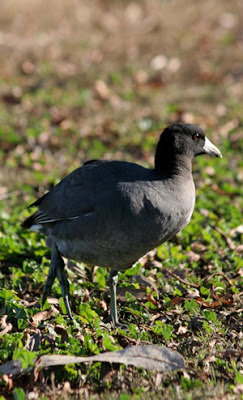 The coot was not standing, but resting with its eyes mostly closed. Not a good sign. When I approached, applying what we call 'pressure', it would stand, but hobble on one leg.

Often, when I encounter birds with old leg injuries, that are otherwise thriving, I'll leave them be. I needed to better assess this coot's condition.

I was able to separate the healthy, aggressive birds from the injured one, using two small piles of chip-crumbles. I watched the coot. It would take two steps and sit - obviously in pain and in need of medical attention.

All of a sudden, a man walked by with his dog on an extended leash, sending all of the birds back into the water except for the injured coot.


I knelt on the grass with the coot resting within an arm’s length of me. It was so close that I actually contemplated grabbing it up with my hands, but then thought better of it and went to my vehicle for my net, which would better my odds of a successful capture.

I slowly approached the coot with my net hidden behind my frame. I knelt back down on the grass with the bird only a few feet away. I tossed a few crumbles to see if I could get it to come close. It showed no interest in the chips, but pecked at grass stems from time to time.

Whenever I made the slightest movement with my hands, the coot would get up, hop a few inches away from me, then settle down again.

I scooted closer and closer, dragging the net behind me, out of its sight. 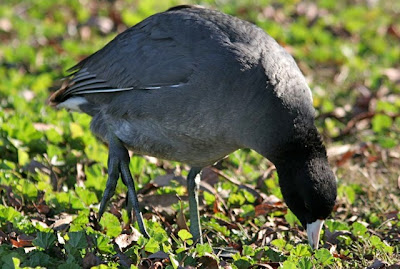 Slowly I moved backwards so that the net would be right next to the bird. Each time I had the net positioned perfectly, the coot sensed trouble, and would move just out of reach.

We did this for over an hour.

Finally, patience paid off. The net was in place, my arms were ready to swing. When the coot sat down and closed its eyes, I 'pounced'.

I transported the coot to the SPCA of Monterey Wildlife Center for treatment. Hopefully they'll find it has an injury that can be treated.

Wonderful story. Thank you for your compassion and patience. Love stories like this.

Thank you, as always, for your dedication and fortitude in all of these endeavors.