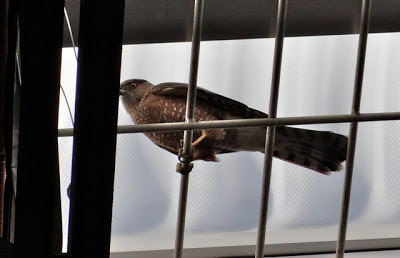 During a busy day of service calls, Duane and Rebecca, who also operate Humane Pest Control, received word of a hawk in a Home Depot. According to the reporting party, it had already been in the building for three days.

When they arrived, they found a Cooper's hawk flying from one skylight to another, landing on the bars just below the glass.

The accipiter appeared to be in good condition - bright, alert, active. Somewhat unusual for an animal that has been entrapped for so long with no food or water. Apparently, though, the hawk had been feeding on small birds in the store - store employees had found bits and parts of English sparrows on top of some of the shelving units.

Because the bird appeared in good shape, the team didn't have to capture it - all they had to do was get it out of the building.

Their first task was to collect information about the bird's behavior. This is key when developing a successful capture plan. It's best to develop a strategy based on an individual animal's natural behavior.

In this case, the bird was known to frequent certain sections of the store and certain skylights more than others. In particular, a skylight in Plumbing. Luckily, that skylight  happened to be one that could be opened.

Duane and Rebecca came up with a plan to open that one skylight and then apply just the right amount of pressure to herd the bird in that direction.

Store employees were eager to help. In minutes, the skylight was open.

Next, a team of helpers was assembled; four to help herd the bird, and one to watch the portal. Rebecca went over details of how they would apply pressure to the hawk using 10' pieces of PVC with flagging attached.

Once Duane located the hawk, the team spread out behind it and began to 'push'. It wasn't long - maybe a minute or two, before the hawk landed on the bars of the opened skylight.

Surprisingly, it didn't fly out straight away, but perched for a moment, as if it didn't realize the glass panels were open to the sky. Then, in a flash, it sprang to freedom.


Many, Many thanks to Brian and all the Home Depot employees who helped in the freeing of this lovely raptor.

I always try to help the birds that are trapped in our grocery store. Great job!!!