It was late afternoon on January 26th when WES received a call about a downed hawk in Felton. It was dark by the time responders arrived on scene - a field of tall grass. Thankfully, Gabriel, the person who first spotted the raptor, was kind enough to stand by and guide rescuers to the bird using a headlamp.

There were no obvious signs of injury, but the hawk was apparently unable to fly. WES's first responders transported the bird to Native Animal Rescue in Santa Cruz.

According to the RP, Suzanne, the hawk appeared every morning on a grassy lawn at eBay Park North, just outside the PayPal building.

For hours, it would root around in the grass, possibly drinking dew from the blades of grass, or maybe finding insects or worms to eat. It could fly, but never very far. For the most part, it ignored pedestrians and allowed people to get within 8' or so.


Thanks to the photos and video supplied by Barbara and Suzanne, we were able to better assess the bird's condition. There were no apparent signs of injury. Its eyes appeared clear, and it was bright and alert. Other than its behavior, it seemed fine.

As wildlife first responders, we work under a Code of Practice, and one of our self-imposed principals is to not interfere with nature - with natural selection. Rarely is this an issue, as most if not all of the casualties we encounter are victims of anthropogenic, or Man-related, trauma, but in this case, it wasn't so clear.

Were we observing an animal that was ill, or suffering from sub-lethal levels of rodenticide poison, or was this an example of an individual animal failing to thrive?


In a wild setting with few human influences, there would be no question of leaving the bird to its fate, but here we were presented with a raptor in a densely populated, industrialized setting.

We decided to capture the bird and have it evaluated. If nothing else, we would learn to better evaluate raptors exhibiting similar behavior.

On February 1st, husband and wife team Duane and Rebecca got an early start for San Jose. They wanted to play into the bird's morning habit of foraging on the lawn and when it would be the hungriest.

When they arrived, the hawk was perched on a light post nearby, above the lawn. It eventually flew down to the grass as expected.

The team set a bal chatri - a trap specifically designed for predator birds. In less than a minute, the bird was on top of the cage that housed a live mouse. The responders had to hold back their temptation to rush in until they were certain the birds legs were snared.

Check out the video of the rescue, below.


The young hawk was transported to the Wildlife Center of Silicon Valley, where an examination revealed the bird to be emaciated, weighing only 808 grams, its mucous membranes were pale and the pads of his feet were somewhat swollen. Blood was drawn to rule out exposure to rodenticide. They expect the results Monday. 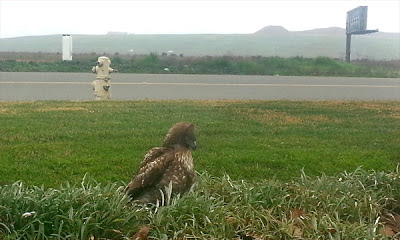 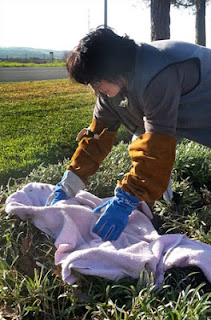 On February 4th, another red-tailed hawk was found grounded in Fremont.

One of WES's experienced volunteers, Sammarye, volunteered to capture the bird and transport it to the wildlife hospital.

This hawk was in bad shape. Weak and unable to fly.

At the Wildlife Center of Silicon Valley, they found it to be dehydrated, emaciated, anemic, and battling an infection.

Unfortunately, this one didn't make it. He died a day later.


Many thanks to the wonderful wildlife medical staff and the
rehabilitation volunteers at WCSV for caring for the ill and injured!