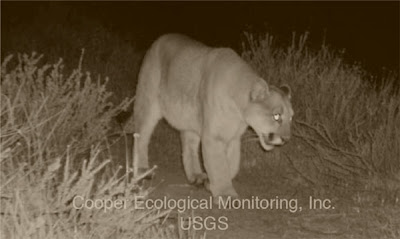 Wildlife cameras had recorded images of the lion weeks earlier. Those pictures were the first known images documenting lion activity in the Santa Monica eco-region east of Cahuenga Pass.

The healthy male lion was estimated to be 3 years old and weighed 120 pounds. He was given the name P22 (Puma 22).

Since the patch of wilderness near downtown Los Angeles is too small to support a resident mountain lion population, scientists knew the big cat must have come from an adjacent wilderness area - but which one?


Results from DNA testing confirmed P22 was from the Santa Monica Mountains. That meant he had to cross two major freeways to reach Griffith Park.

On March 20th, 2013, P22 was spotted again and captured on video camera. Check out the images of P22, below, recorded by one of the Griffith Park trail cameras.

For more on mountain lions, and extensive information on the lions of the Santa Monicas, visit Urban Carnivores site, HERE.

For more on the forensics involved in the mountain lion studies, click HERE.

Someday, I hope there is research done to determine impacts of those huge collars on deer, ML, wolves, and others. Does it slow them down on the chase? Become stuck in brush? Someday, I hope a micro chip can be implanted to provide the same data w/o the collars.