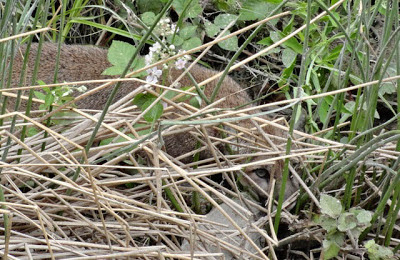 At 8:10 this morning we received a call from Santa Cruz Police Department and the Santa Cruz County Animal Shelter looking for assistance with a mountain lion incident in Santa Cruz.

A young male mountain lion, estimated to be just under two years old, had wandered down from the Santa Cruz Mountains and into the thick of the city.

It was first observed at daybreak in the parking lot of the Ramada Inn on Water near Ocean. Under pursuit by authorities hoping to contain it in a safe location, the lion leapt over a security fence and into the San Lorenzo Creek.

The vertical cement walls of the urban channel were too high for the cat to scale, leaving it only two ways out. Feeling pressure from a growing number of first responders and gathering spectators, the cat sought shelter in a relatively small patch of reeds.


With the animal quiet and somewhat contained, authorities had time to work out a plan to get the lion safely out of the city and back into the wild.

One of the first plans under consideration involved herding the lion up the channel, but that would have deposited it into a residential area. It would be safer to tranquilize the animal and move it to a suitable location.

Thankfully, specialists from the UC Santa Cruz Puma Project were on scene, lending their expertise in safe capture of relocation of the large felines.

For more on this story, please check out the Puma Project's blog post, HERE.


Today's incredible rescue was a team effort - an outstanding demonstration of the Department of Fish and Wildlife's new mountain lion policy, which encourages collaboration with outside specialists for non-lethal options.

The successful outcome was also a result of the caliber of people involved - everyone was at the top of their game, calm, cool, and professional.

Check out the news coverage:

Great collaboration by a variety of agencies with the best outcome for all! Way to go!!

Thank you for saving this poor guy.

I was overwhelmed by this post, not just for the beautiful outcome but because, as you write, it shows the potential of this alliance and the department's new mountain lion policy. I'd love to see this type of professional and compassionate approach used everyday, across the board, in most human-wildlife conflict situations. Thank you, guys, for your diligence on behalf of all wild animals.