This week, we assisted Peninsula Humane Society in their efforts to reunite 3 Western screech owl chicks in Los Altos, CA.

On Sunday, April 28th, one of the owlets was discovered at the base of a palm tree in a residential backyard. The little owl was taken to PHS' Wildlife Center for care.

All 3 owlets were healthy and uninjured despite the 30' fall. They were reunited and housed together at the wildlife hospital, but needed to get back home.

Reuniting wildlife takes a tremendous amount of time and effort, especially when it involves constructing a replacement nest. Besides having to build and secure the nest, the process often requires coordinating with the wildlife hospital, the reuniting team, and land owners. 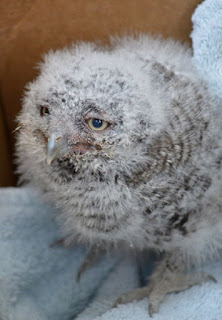 By the time everything was organized, days had passed, and that was a major concern. The parent owls had been without their chicks for 3 nights! Were they still there? Would they take them back?

Together, we decided it was worth the effort. The babies would never be in harms way, and if the reunion failed, the chicks would return to the wildlife hospital and be cared for until they could fly and hunt on their own. 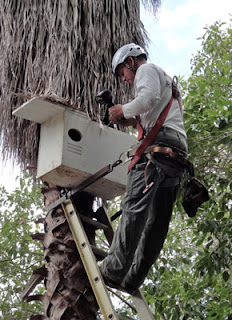 On Sunday, May 5th, WES volunteers met at the residence near North San Antonio Road.

Lindsay had driven to Burlingame and picked up the baby owls and a go-bag of dead pinkie mice, Duane and Rebecca drove from Moss Landing with the owl box and ladder, and Susan, Sammarye, Jeff and Jessica were on hand to help out.

Duane carried the nest box up the ladder and began securing it to the trunk of the tree, when out from the dried palm fronds flew an adult screech owl - a good sign that at least one parent was still around!


Check out the video of the renesting:


One of the most important steps in the reuniting process is monitoring to confirm a successful reunion. In this particular case, we wanted to be sure an adult screech owl entered the box, or, at the very least, perched at the entrance. Neil, the resident and person who'd first discovered the babies, volunteered to keep watch for us.

The next morning, Neil reported hearing a lot of owl activity in the backyard, but he could not be sure an adult entered the box.

After consulting with Patrick Hogan, Wildlife Supervisor at Peninsula Humane Society and strong advocate of reuniting, we agreed it was worth another attempt - we'd leave the babies in the box another night. This time, though, we'd have eyes inside the box!

He met Lindsay at the house before noon so she could feed the owlets. We needed to be sure they had a good meal since we weren't certain the parents had tended to them during the night. Timing was important, though. They needed to be fed early, as opposed to later in the day, because we wanted them hungry and vocal come nightfall.

Once again, when Duane climbed the ladder to work on the nest box, one of the adult owls flew from the dry fronds. This time it landed in a nearby tree and kept watch, intently.

Show time! With the camera and monitor in place, all we needed were a couple of volunteers willing to give up their evening to monitor the box. Thankfully, we have some amazingly dedicated volunteers who agreed to "babysit".

Susan McCarthy took the first shift, arriving at 7:30. She parked next to the yard, near the tree, and brought the little television monitor into her car to watch covertly. Susan kept in touch with the team, texting what she observed.

By 8:30 there had been little activity, though Neil said he saw the parents flying around the palm tree.

Subject: I have sound turned down. adults may be chucking - someone is.

At about 9:30, Sammarye Lewis arrived for the next shift. The two continued watching and waiting. At one point, they saw an adult owl peek inside the box, then fly off. Finally, right about 10:00 PM, one of the parents entered the box and fed a bug to its chicks.

This was an exciting moment for everyone involved - confirmation that the parents had found their young and resumed parental care.

Neil kept watch and continued to report what he saw. The first night after the camera was installed, he said the parents only peeked inside to feed, but never entered the box. The following night, though, both parents were seen entering the box multiple times.

Check out the video of the parents feeding - it was recorded off the tv monitor by Neil. (Thank you, Neil!)


A TREMENDOUS THANK YOU TO EVERYONE WHO HELPED MAKE THIS REUNION POSSIBLE!

Stay tuned! We're looking at the possibilities of installing a permanent "nest cam" that could stream live video through Ustream, so everyone would be able to watch these lucky babies grow up. The projected cost of the setup it about $600.00. If you'd like to sponsor the Los Altos Screech Owl Nest Cam project, please go HERE.