Of gulls and ducts 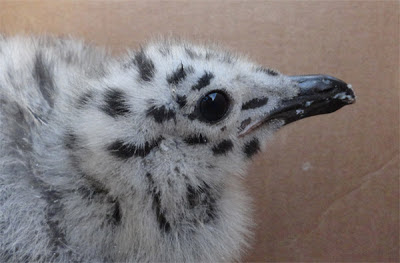 Yesterday, WES received a call from the owner of a business in Santa Cruz. She had just opened her office door to do some weekend cleaning and found a baby gull wandering around on the carpet. Also on the floor, was one of the ceiling air vents.

The baby must have fallen in from the rooftop and slipped through the ducts and into the office space. It had probably dropped in sometime after closing on Friday night.
The downy chick was transported to Native Animal Rescue on 17th Avenue where it received a through examination. It was in excellent shape.

That afternoon, Duane and Rebecca set out to return the baby to its parents. 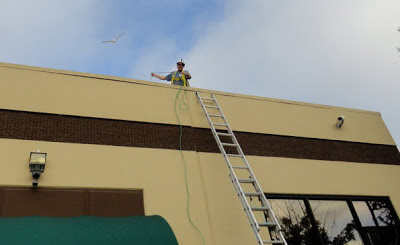 As Duane climbed the ladder, the parent gulls became alarmed. Their calls got the attention of other gulls that came to investigate. 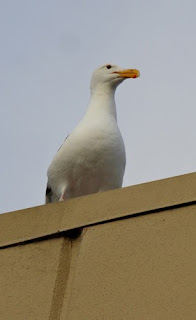 Once on the rooftop, Duane found the nest with another baby gull nearby. He also found what had happened - one of the metal doors of the building's air conditioning units had fallen off.

Gulls are semi-precocial. They hatch with their eyes open and covered in down. Within a day, they are able to walk and leave the nest to explore. When frightened, they will hide in or under vegetation, or whatever they can find.

The chick must have been exploring or maybe it got scared and tried to hide in the air conditioning unit.

After securing the door back in place, Duane collected the one baby gull and placed it on the nest with its sibling - the one that had fallen. He covered them with a dark piece of fabric to keep them quiet while he walked away. This technique reduces the chance of them panicking and scattering.

Once on the ladder, Duane tugged a rope to remove the fabric off the chicks. They stood and walked off together, slowly, which is what we wanted.

This morning, another chick was found inside the building!

Duane returned that one, too.

We thank you if Mr and Mrs Gull forgot to.