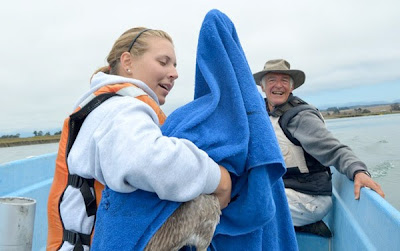 Great team effort to save a pelican. TeamOCEAN radioed one of our first responders, Ron Eby, about a pelican that seemed to be in trouble. At the time, Ron was on the water doing some research monitoring for Elkhorn Slough National Estuarine Research Reserve.

The bird had gone ashore in a wildlife viewing area. By boat, Ron tracked it down and was able capture it before it got back in the water.

The bird had a hook deeply imbedded in its neck and damaged feathers from the line.

Ron radioed Monterey Bay Kayaks to pre-stage a box for him at their shop in Moss Landing, where the bird was later picked up by SPCA for Monterey Wildlife Center.