In the wake of the Texas City Y Oil Spill

We are calling for change. Sign the petition, HERE. 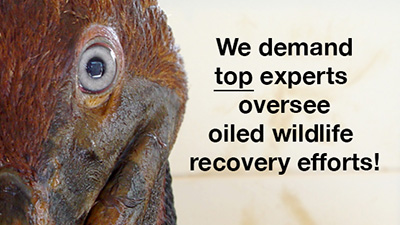 This quote in the Texas Tribune by a US Fish and Wildlife Service (FWS) representative did it...

"Nine times out of ten, it's not worth capturing a bird,"

I called her - Nancy Brown, to ask her about the statement.

While she was quick to say it was taken out of context, her clarification was no better, explaining that birds that are oiled and still able to fly are incredibly difficult to catch and capture attempts only increase stress on them, and they are already in a depleted state due to migration, and because the objective is to not add further stress, nine times out of ten it's better not to pursue a bird like that.

She went on to say that they are getting a lot of reports of oiled birds but "there's no chance of catching" them because they are still flighted.

I told her that there are various techniques for capturing flighted birds, and that there are world leaders in oiled wildlife recovery that have the skills to capture these birds,... and then I asked why not one of them had been invited to help with the recovery efforts?

She asked me if I was selling her something.

I went on to tell her about International Bird Rescue, Tri-State Bird Rescue, and their local Texas Wildlife Center, and that it seemed odd that these experts weren't advising on recovery efforts or, at the very least, in the field helping locate and catch oiled animals?

She told me the experts were there. That they have the finest people in the agency on the ground - people who know the topography, the shoreline, the currents, the tides and weather patterns...

Indeed, use of local resources is very important, but, what's missing, I repeated, are the experts in oiled wildlife capture to work hand in hand with the locals...

Again, she asked if I was selling her something or have a vested interest.

NO!!! I am not selling anything, but, I do have an interest in the resources you're charged with protecting - that's my interest!!!

Maybe I should have turned the table on her and asked what her interest was - what does the US Fish and Wildlife Service have to gain?

Could the feds be profiting from oil spill response?

Is that why they squeezed us out of the field during the Deepwater Horizon? How much did FWS make off the Gulf Oil Spill? Anyone? Anyone?

(Rachel Maddow - are you reading this?)

The conversation ended with her telling me to submit my concerns and suggestions online at this address, HERE, which I did. Feel free to send in yours.

Afterwards, I did some more digging. I tried to make sense of the FWS role in oil spill response, HERE. It seems they take direction from a National Contingency Plan, but also from a ten-year-old document Best Practices for Migratory Bird Care During Oil Spill Response.

This document was developed after the Exxon Valdez oil spill (1989) when oil companies were being misled by people claiming to be oiled wildlife experts. Agencies needed a way to evaluate responders, so, the two leading organizations - International Bird Rescue and Tri-State collaborated on this document with the FWS.

There is only so much guidance a document like this can provide - hands-on involvement by experts is essential,... but here's the problem - here's the conundrum: no one else knows that but the experts.

At the start of the Texas City Y oil spill, the FWS assumed the lead and took control of wildlife operations. Because there is no oiled wildlife capture expert on scene to advise, decisions are being made from an inexperienced point of view.

What can be done? 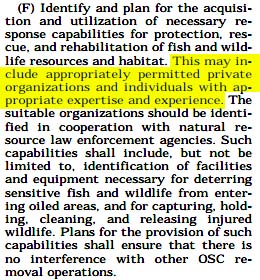 The People need to demand change. The FWS is a trustee agency - it is charged with protecting our wildlife. We must demand that they strengthen oil spill contingency plans to require at least one representative from a leading oiled wildlife response organization - namely International Bird Rescue, Tri-State, or Texas Wildlife Center, be assigned a position in the Wildlife Branch during any major oil spill in the United States.

Add your voice - demand that experts be utilized on major oil spill, HERE.

Dear Rebecca,
Just to put mind at ease. I was called into respond to this incident on the wildlife front. A couple of the groups you mentioned as experts were in fact involved. While there was some mortality due to the spill many birds escaped the worst and others were captured, cleaned, rehabilitated and release at a local wildlife refuge. My experience with USFWS was quite good I am sorry to read that you had some a hard time communicating with them.
I look forward to more of your reports.

Please supply your name and email me privately so I can confirm this, otherwise this comment will be deleted.