Rough start for a newborn fawn

This is a continuation of a fawn's story that began HERE, where a newborn fawn was found crossing a road, trying to keep up with its mother...

This morning, we received a call from a resident of Boulder Creek. He said he was in his backyard photographing a fawn on his hillside when it stumbled and disappeared into a hole behind a retaining wall.

I asked him to email a photograph. He emailed a picture of a really small opening in the dirt - maybe the width of my palm. 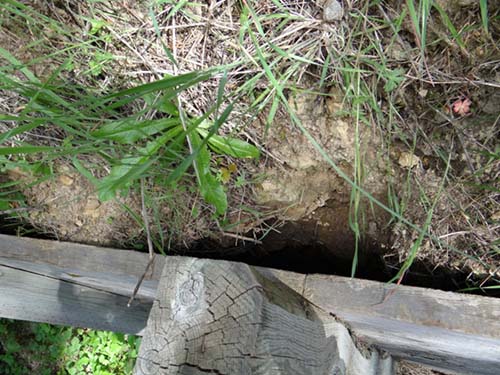 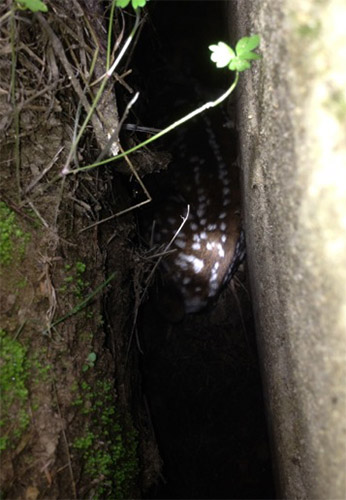 He was so positive, though...

I asked (before we drove 45 miles) if he wouldn't mind taking a picture inside the hole. Show me the spots.

The image on the left is what he sent.

Sure enough - there's a fawn in the hole.

Duane loaded special equipment into the rescue truck - rope, shovels, a chain saw - and we headed for Boulder Creek. 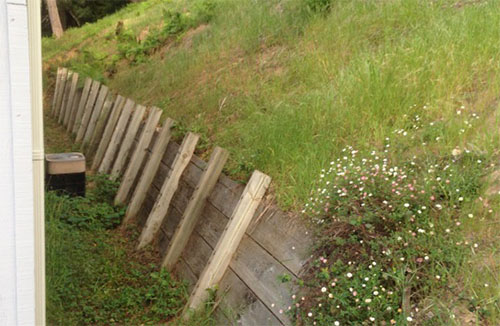 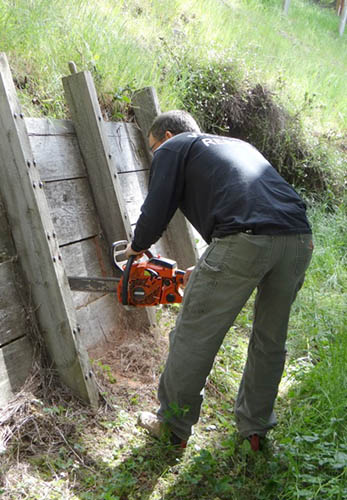 After considering various ways of lifting the fawn up and out, the homeowner offered that we saw a hole in the retaining wall.

Before cutting through the wall, we wanted to be sure to keep the fawn safe, so we placed a shovel on one end and a rubber mat on the other to keep it confined to a small area.

Check out the video.


When you think about it, it's really amazing that the homeowner happened to be watching the fawn when it fell. Otherwise, no one would ever have known it was in there - ever! 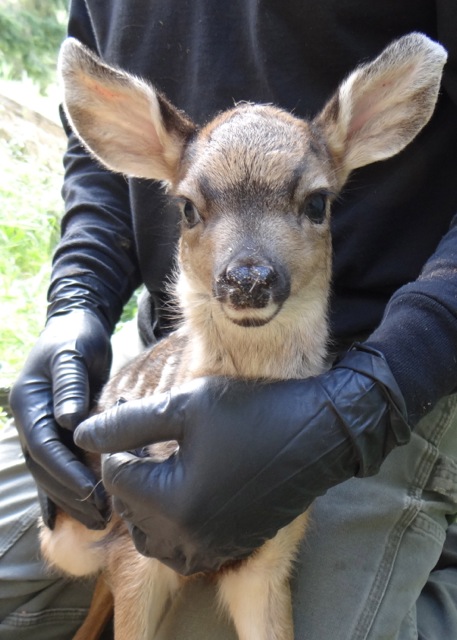 The fawn appeared to be in good condition so we decided to attempt to reunite it with its mother.

We carried the fawn up the hillside where the doe was last seen.

Cries from her baby brought her out from hiding.

The reunion was a complete success - by the book - perfect... until the fawn started circling.

Three days earlier, when Nicole called about the fawn crossing the road in front of her house, she mentioned that it circled a few times, like it was looking for its mom, and then laid down. I thought of how a dog will sometimes circle before it lies.

I asked Nicole to send me the video her husband had taken, but she wasn't able to send it until the following day, which was too late...

Now, because these reports were from two different addresses in Boulder Creek, I thought we might have two fawns exhibiting this, almost neurological disorder, until I checked my records. The addresses were only a few houses apart - this was the same fawn from the 19th.

We did not believe its condition was trauma-related but either congenital, a deficiency, or disease-related.

It would not survive if left with its mother, so we made the decision to retrieve it.


Duane backed me up as I climbed the hill. What a horrible feeling, taking the baby from its mom - separating them - again.


The doe backed off as I approached. The fawn cried as I scooped it into my arms and the doe advanced. Duane held her off and slowly retreated downhill.


We transported the fawn to Native Animal Rescue for evaluation and treatment.


Meanwhile, the doe remains on the hill, waiting for her baby. This is a perfect situation where we could take a healthy fawn that's lost its mother and wild-foster it with this very good mom.