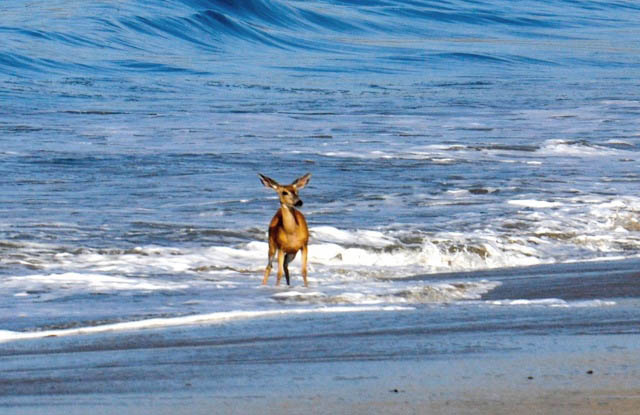 Malibu. Early this morning, just before 7:00 am, Malibu Road residents spotted a deer at the edge of the surf.

Residents gathered and formed a large perimeter around the deer to prevent beachgoers and off leash dogs getting too close and chasing it into the ocean.

Deer are flighty animals and will swim into a body of water if frightened. They've been known to keep swimming out and away from danger until they are exhausted, and finally drown.

Authorities were called. A plan developed. The California Department of Fish and Wildlife would sedate the deer for transport to a safe location. A tranquilizer would reduce the chance of the deer injuring itself, rescuers, or motorists should it bolt for the highway that was just yards away.

While waiting for the wildlife officer, an officer from Los Angeles County Animal Care  and Control (LACACC) arrived and stood guard with residents on the beach. Two sheriffs helped, too, but were called away for a human emergency. 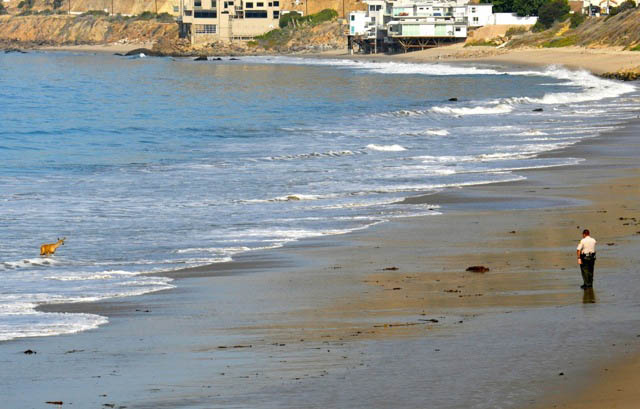 It was about 9:30. The deer was still standing on shore. Beach goers had been very respectful and kept their distance, until a lone jogger blatantly disobeyed signals to stay clear, and ran right between the officer and the animal.

The deer bolted into the ocean, swimming as fast as it could, next stop Hawaii!

Without hesitation, Malibu Road resident Bo Bazylevsky grabbed his paddle board and hit the water, hoping to head off the deer and steer it back towards shore.

Two other residents, Michaela Haas and Paige Roberts, ventured out in a tandem kayak.

The fisherman grabbed the deer's head and was able to hold it above water while Bo pushed them towards shore. They made slow progress, fighting to guide the struggling animal.

Michaela and Paige arrived just in time. Michaela dove into the water to hold up the tired animal. Using a dog slip leash, she was able to harness the deer and lead it to shore.

Officer Rosenberg covered the deer's head with a blanket to keep it calm. Together, the team strapped the animal to a gurney and carried it up the steep bluff to the animal control vehicle. 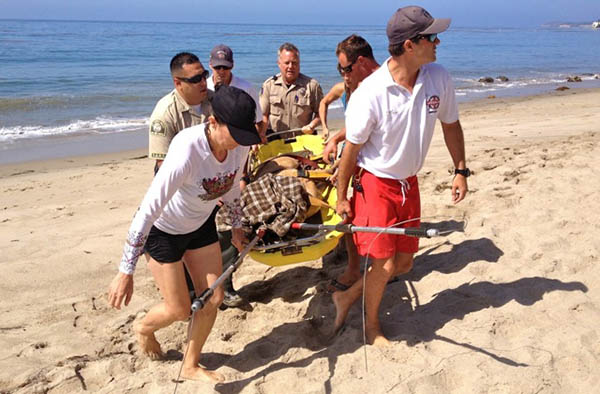 The deer was rushed to the California Wildlife Center for a quick assessment, then on to Malibu Creek State Park where it was released back into the wild.

For all the bad things we humans do to animals, it sure is nice to see such a great effort from so many people to help this wild creature.


THANK YOU TO EVERYONE WHO HELPED RESCUE THIS DEER!!!

Hi! Thank you for posting this story. The fisherman is my husband Brian Albertson, a life long ocean and animal lover. This rescue made his day!

It's heartwarming that there are people who will spend 2 1/2 hours on the beach protecting a deer in danger, and even more so that there are folks who paddled out to help it. Very well done!