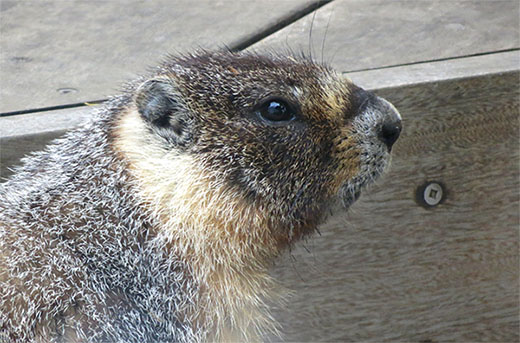 Yesterday, WES was alerted of another yellow-bellied marmot in San Francisco.

According to the resident of the Potrero Hill neighborhood in San Francisco, the marmot first appeared in their backyard about two weeks ago.

Since then, it's been living under their deck and spending each day dining on a garden of fresh greens, fruits and flowering plants.

This morning, WES' Duane Titus will attempt to capture the marmot so it can be returned to its native habitat. 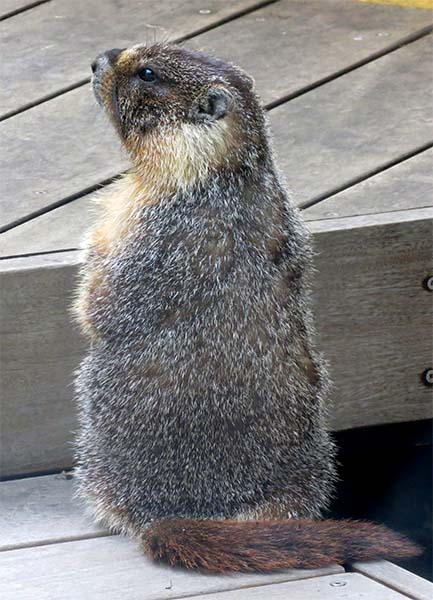 Marmotinis are ground-dwelling burrowing rodents. Marmots are the largest of this ground-squirrel tribe.

Marmots are found in higher elevations, above 6,000 feet. In California, yellow-bellied marmots, affectionately called 'whistle pigs' for their shrill alarm calls and portly build. They inhabit the grasslands and alpine meadows of the Sierra Nevada, Cascades, and White Mountains.

Marmots are notorious for "hitching" rides as stowaways in engine compartments, ending up hundreds of miles from home.


Why? Theories include the rodents' attraction to the rubber hoses of an engine or the sweet-tasting but intoxicating radiator fluid - ethylene glycol.

While finding a marmot in the city is certainly unusual, it's not uncommon. WES receives calls every year about marmots on the loose. In 2012, rescuers captured a marmot in San Jose (story HERE), another one in Gilroy (HERE) and again, last year, another marmot (HERE) was captured. This one actually became quite famous with its own Twitter account, Bernal Marmot. 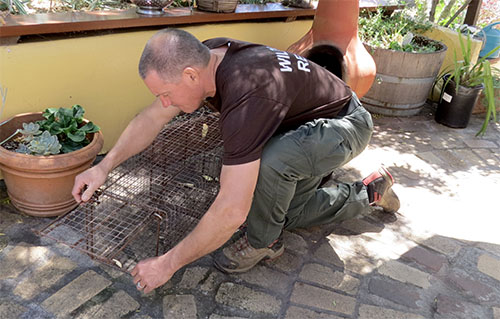 It was just after noon when Duane arrived. He set two cage traps in the backyard garden, each carefully baited with a different treat that a marmot might like. One, with sliced melon and a couple of pieces of apple drizzled with molasses, and the other with organic Fig Newmans.

After setting the traps, the backyard was left undisturbed. Duane and the homeowners watched and waited from inside.

While waiting, the family prepared lunch and invited Duane to join them. Just after the meal, the marmot was observed loping (as much as a whistle pig can lope) in the yard, crossing the garden to the plum tree where it snacked on a couple of plums before finding a bit of Fig Newman.

Searching for more of the delicious dried fruit cookie, it followed a trail of crumbs that led into the cage trap. Finally, it discovered a whole Fig Newman cookie on the lever, and that was that. Duane had his marmot. 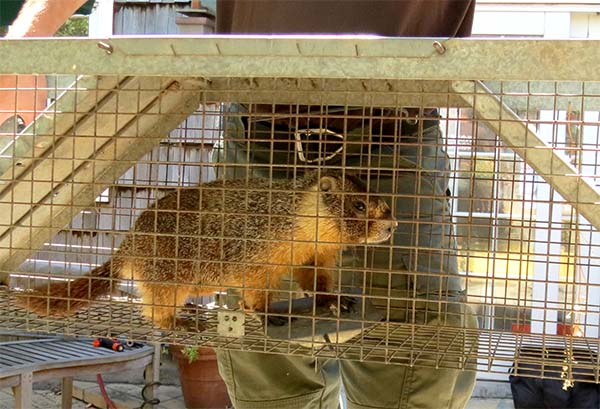 The animal was loaded into the rescue truck and transported to the Wildlife Center of Silicon Valley where it received a health check and was found to be healthy and free to return to its home in the wild.

Thanks to widespread news coverage of the marmot's dilemma, we believe we found where it came from - an area near May Lake in Yosemite, some 200 miles east. Even in a fuel-efficient car, the roundtrip will be costly.

To help out, the Rock Bar in San Francisco through a little fundraiser - a percentage of every Marmotini sold to help cover fuel costs of getting the marmot back home on Monday. Sammarye Lewis will be driving the critter back to May Lake. (THANK YOU, SAMM!!!)

If you'd like to contribute some gas money to this trip or to offset the cost of fuel for the many miles we travel to rescue wildlife, click HERE. Any amount helps and is very much appreciated!

Want to be an on-call First Responder for WES, sign up HERE.