The results are in. Both bobcats recovered from the UC Santa Cruz campus last month tested positive for exposure to anticoagulant rodenticide. We want to stress that just because the animals were found on campus does not mean they were exposed to rodenticides on campus.

The first bobcat - a mother with its remaining kitten by its side, was found ill on September 3rd. Read the full story, HERE. WES captured the cat and delivered it to the Wildlife Center of Silicon Valley where it died later that night.

WES rescued a second bobcat from campus on September 8th. It had been struck by a vehicle. Read about its rescue, HERE. It, too, did not survive.

The first cat showed classic signs of exposure to rodenticide. She was suffering from mange and was extremely thin and weak. We sent her body to the California Animal Health & Food Safety lab in Davis for testing.

The second bobcat, a male, was rescued less than half a mile from where we captured the female. We decided to have his liver tested as well, even though he looked in fairly good physical shape.

Here are the results: 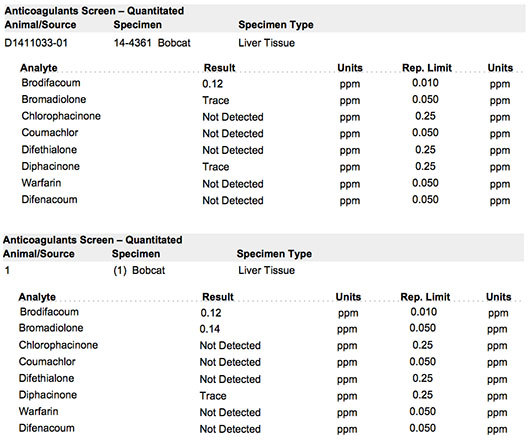 Bobcats and other wild animals are exposed to anticoagulant rodenticides when they consume mice and rats that have eaten the poison. Use of poison bait is common - too common, and it's taking a toll on our wildlife populations.

We will update this blog post as we find out information on how the bobcats may have been exposed. In the meantime, check out this post, HERE, by Laurel Serieys, PHD. Laurel has done extensive research on bobcats and rodenticide exposure.