WES responding to mystery incident in the Bay 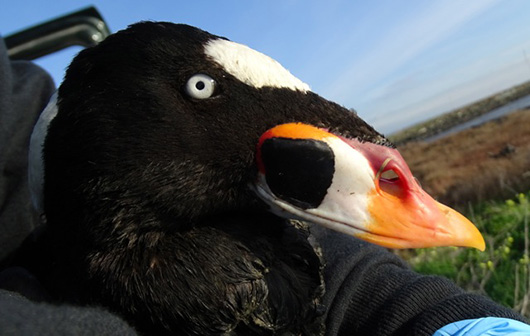 On Sunday, Wildlife Emergency Services (WES) was alerted of a situation in the San Francisco Bay - numerous sea birds were being found along the shore of Hayward, coated in a gooey substance.

The birds were first observed on Friday!

California Office of Spill Prevention and Response collected samples but due to the holiday weekend testing to identify the substance was postponed until Tuesday. They did, however, declare it nontoxic and not petroleum-based.

Good news for responders, but not such great news for the birds - the substance coated their feathers just the same as oil.

Feathers are like shingles of a roof - it's their structure and alignment that keep out the wind and rain. When something, impairs a bird's weatherproofing, it's just a matter of time before the bird becomes hypothermic and dies from exposure to the cold environment.

By the time we were alerted, it was Day Three. The clock was ticking.

With any event involving birds that have lost their waterproofing, it's a race against time to collect the birds before they succumb to the cold. The longer a compromised bird remains in the environment, the weaker it becomes, and the less chance it has of surviving the cleaning process.

In this window of opportunity, responders focus on the most heavily coated birds first - the ones that cannot float or fly. Oddly enough, they often do the best because they are found and collected quickly.

It's the ones that are still very mobile and flighted that prove the most difficult to catch.

It requires training, skill, and special equipment. It requires strategic planning and cooperation among responding parties to successfully capture flighted birds. They mustn't be hazed or chased after as this can cause them to disperse from the area.


WES specializes in response to animals in distress. Its founder, Rebecca Dmytryk, author of Wildlife Search and Rescue, is an expert in capturing wildlife, along with her husband, Duane Titus, who has lead search and recovery efforts on numerous oil spills, including the BP Deepwater Horizon spill in the Gulf of Mexico.

After hearing about the birds being found along the shore near Hayward, WES mounted a response, calling on their volunteers to help. Colleague, Mark Russell, representing International Bird Rescue, also responded.

Because the substance isn't a petroleum product, a formal, structured response by state, federal and local agencies was absent. We were on our own. The conundrum is explained well, HERE.

We gathered at the East Bay Regional Parks Office at the end of West Winton, in Hayward. That became our staging area, thanks to the Park Service.

Before noon, a team of 4 trained volunteers from WES were scouring the shoreline in search of birds. It wasn't long before they'd captured a dozen birds coated in the sticky substance.

Together, with 3 responders from International Bird Rescue and support from East Bay Regional Parks, at least 60 birds were rescued before dark - birds that might not have made it another night exposed to the elements.

Check out some great news coverage, HERE, and HERE.

Check out some capture clips, below:

On Wednesday, WES assumed the lead in field response, coordinating rescue efforts with assistance from Deb Self from Baykeeper, who helped coordinate volunteers and media inquires. (Thank you, Deb!) 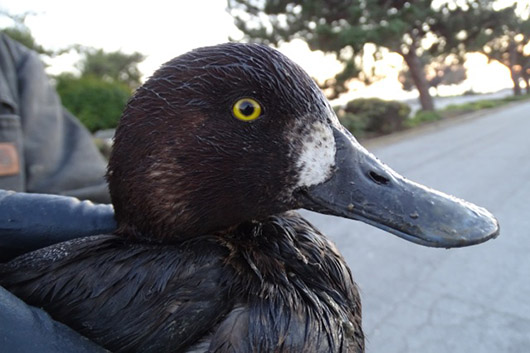 By Wednesday evening, sightings of birds in distress had dropped. It was time to call off official search and rescue efforts and focus more on responding to reports from the public.

Thanks to an outpouring of support from the public and the local birding community, we have had volunteers scoping the shoreline ever since.

On Thursday afternoon, WES' volunteer Tori set out to survey the area and respond to reports of beached scoters.

She needed a net in case she found the birds, so she stopped by West Marine to pick up a long-handled net (that barely fit into her car).

Following the directions given by the person who first spotted the scoter at 9:00 AM , Tori checked out the area across from the Harbor Bay Club and sure enough, found a live scoter and caught it in her new net! Way to go Tori!

The bird was immediately transported to International Bird Rescue. 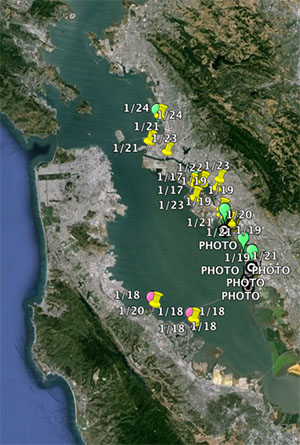 Check out an interactive Google Earth map of some of the sightings (yellow pins) and captured birds (green markers), HERE. You'll need Google Earth to view it. Get Google Earth HERE.

Friday was fairly quiet, with only a few reports of birds. Tori resumed scouting for birds. Sadly, she found one that was called about the day before, but it had died.

We're still concerned for the number of shorebirds, dunlins, sandpipers and whimbrels along the Hayward Regional Shoreline. Some are quite contaminated, yet still flighted.

A good soaking from rain might slow them down, but with no rain in the forecast, their capture is doubtful.

In an effort to strengthen wildlife response capabilities in the Bay Area, we are offering an Oiled Bird Rescue training on February 20th at the Fort Mason Center in San Francisco. Register, HERE. 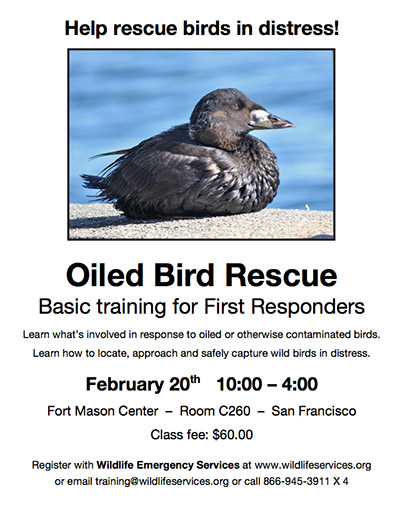 We want to thank all of our responders who helped search for and capture birds - Dana Angus, Deanna Barth, Andrew and Ben Bear, Tori Carpenter, Rebecca Dmytryk, Ron Eby, Duane Titus, and Ken Weidner, and to our new volunteer, Kira Gunderson. To IBR responders, Mark Russell, Susie Kosina, Sean Boty, Amber Transou, and the many folks who helped scour the shoreline looking for birds.

A big thank you to Deb Self with BayKeeper for helping coordinate volunteers, to Jerry Mix with International Bird Rescue for providing emergency transport, and the OWCN for providing the stabilization trailer.

Finally, the rescue of the hundreds or so birds we collected would not have been possible without the help from East Bay Regional Park Supervisor, Mark Taylor, rangers Joel Eisler and Chris Benoit, and wildlife biologist Dave "Doc Quack" Riensche.

Lastly, these birds would not stand a chance if it were not for the expert care they are receiving through International Bird Rescue in Fairfield, leaders in treating birds impacted by oil and other pollutants. Thanks to everyone who has supported their efforts to get these birds stabilized, washed and ready for return to the wild.

WES is a small nonprofit based in Moss Landing. We would not be able to respond to such large-scale events if it were not for support from our volunteers and donors.

We're grateful for those who chipped in to offset the cost of our response, especially helpful was a donation made in Memory of Eldon Olson. Sponsor WES for a day or more, HERE.

Great work saving those poor birds, thank you! Is there any way to petition the state government to take an interest in these types of disasters, in the future?

Great work! Many thanks, and please any of you who are interested in being trained by WES to assist in such events, sign up now for their training.
LA area training is scheduled for 2/13/15 and 2/14/15.