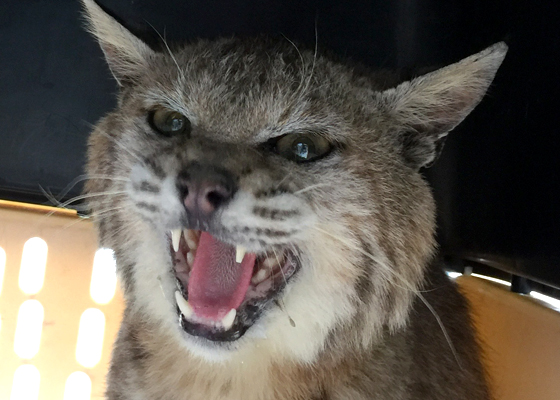 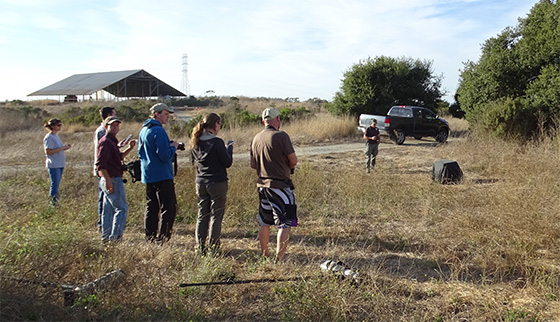 Yet another sick bobcat 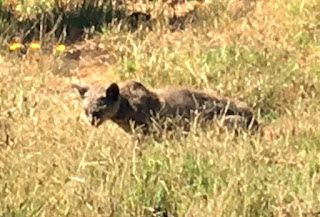 What is going on?

Another sick bobcat was reported to us on Wednesday. A person reported seeing a bobcat hunting gophers in Oakwood Memorial Park in Santa Cruz. She said the animal let her get unusually close.

Sure enough, photos revealed the cat is suffering from mange and is very thin.

Within a couple of ours of the sighting, we staged a trap near where it had been seen, but had no luck. If anyone sees this bobcat, please contact us immediately. 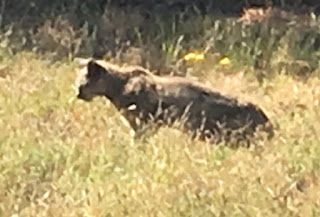 In late August we received an alert from the WildHelp Mobile App about a sick bobcat in a La Selva Beach neighborhood. The picture accompanying the alert (above) was helpful in evaluating the animal's condition.

Clearly, this bobcat was extremely ill, suffering from mange that might possibly be linked to anticoagulant rodenticide. Predators are exposed to these powerful chemicals when they consume rodents that have eaten the poison.


Although the skin condition can be cured and blood clotting issues can be treated, with a half-life (the time it takes a substance to reduce its concentration by half) of four months to a year, second generation anticoagulant rodenticides (SGARs) can remain in an animal's liver even after rehabilitation and release back to the wild.

Due to the substantial impact to wildlife, state and federal regulatory agencies have taken steps to reduce availability of SGARs to the general public and cancelled production and sale of certain d-Con products (more HERE), but, because retailers are being allowed to sell their remaining inventory, these poisons are still readily available.

Note in the picture (Left), RatX, the only wildlife-safe rodenticide, is on the bottom shelf.

As for this bobcat's rescue, there were logistical issues that delayed attempts. One major problem was the neighboring home allowed their chickens to run free. Over time, they have lost a number of chickens to predators, including this bobcat, but, we were told, it wasn't an issue for them... they didn't mind losing a chicken now and then...

This complicated matters for us. With free-roaming chickens next door, the bobcat would probably not enter our trap. The cat seemed to have a pattern, too. It would take a chicken, then disappear for days. Because sightings were so inconsistent and the investment of time to set and sit on the traps and the issues with the neighboring property, we decided to postpone rescue attempts until sightings were more regular.

Finally, we received a call yesterday afternoon. The cat was back!

Although it reportedly looked far worse than before, emaciated and weak, it tried to take another of the neighbor's chickens but was scared off its kill before it could make a meal of it.

When we arrived, we found the small bobcat - about the size of a house cat, resting in a row of corn, seemingly unconcerned with people walking by.

Using a long-handled hoop net, we captured it fairly easily - just be stealthily sneaking up from behind. Once in the net, the cat put up a bit of a fuss, but settled down quickly. With the animal in the sock of the net, separated with a piece of plywood, we married the hoop of the net with the transport carrier, then scooped it into the crate using the plywood. 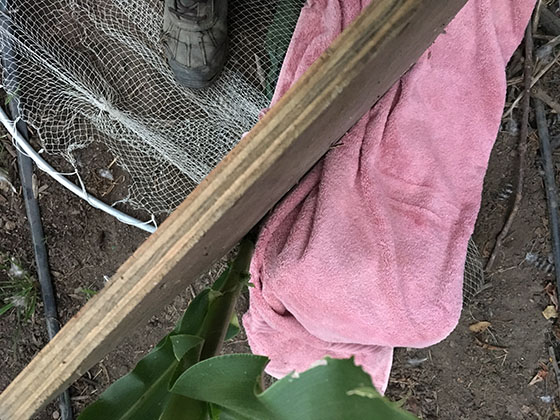 The bobcat was housed overnight. It was provided warmth and a meal - a half of a chicken breast and water.

This morning, it looked better - a bit more responsive. It was transported to the WIldlife Center for Silicon Valley where it received a thorough examination. 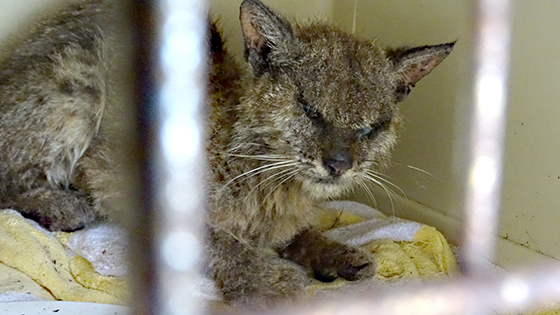 They found the male bobcat to be about 5 years old, extremely emaciated, weighing just under 12 pounds. He was given fluids and started on an emaciation diet. His prognosis is Guarded. Good news - his clotting times appeared normal so there is no immediate concern about rodenticides being a factor in his illness.

The bobcat survived his first night, which gave us hope, but, he died on the 6th. His body will be sent to the state lab to find out what killed this majestic animal.


Thank you Mary for helping with the rescue and transport.

Thank you Justin for helping wrangle the cat into the crate!!!