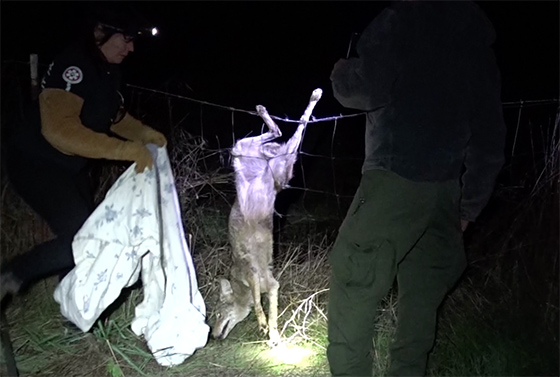 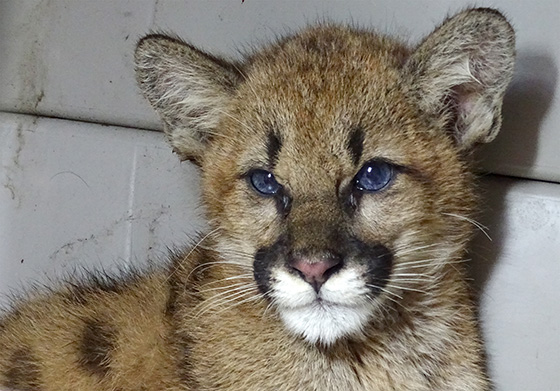 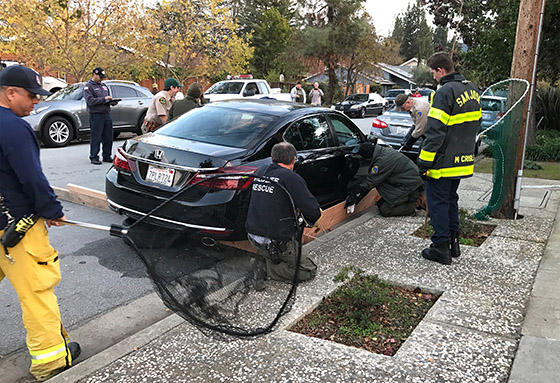 Double trouble for a skunk 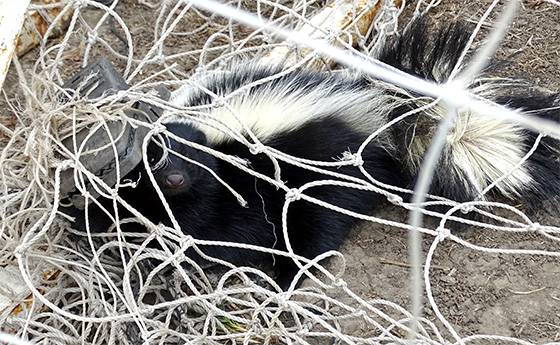 This may turn out to be a bit more of an opinionated piece than a straightforward account... This rescue left me pissed and sad...

It was close to 10:00 AM when WES received a information about a skunk caught in netting at the Landmark Elementary School in Watsonville. Apparently it was caught in a soccer goal, and a game was about to start. I told the reporting party to keep the area clear of people and as quiet as possible.

Duane and I were on scene in about 40 minutes. A kids soccer game was underway. Yelling, cheering, coaches' whistles, just a few yards away from the poor skunk - its front left paw caught in a heavy-duty snap trap and tangled in the netting.

The soccer game continued as we slowly approached the animal and Duane began cutting away the netting. Chirp-chirp-chirrrrp from a whistle, parents yelling, coaches barking just yards away from us trying to help this poor animal in distress.

Were the children really not interested in watching a wild animal get rescued? Were the adults that insensitive? Was this just an inconvenience to them?

This could have been an amazing learning experience for the children (and adults). What a great opportunity to teach about humanity, compassion, respect for other living things. But the game went on...

...until I couldn't take one more blast from that damned whistle!

Unnerved, I tried to ask as nicely as possible if they would please stop for five minutes... just give us five minutes of quiet.

It only took a couple of minutes before we had the skunk free... his paw, deformed from the powerful jaws of the trap.

Scruffed and bundled, we carried him across the field to the rescue truck, nodding to the few spectators who applauded our work. (Thank you!)

A chirp from the whistle and the game was back on again.

We delivered the skunk to Native Animal Rescue's skunk rehabilitator, Monique, where he will be examined and treated for his injuries, and, with luck, he'll be returned to the wild.

Hoping the skunk makes a full recovery, I am less optimistic about our recovery... recovery from what we have become. We've lost something. We're not as kind and forgiving, or tolerant or accepting as we used to be, it seems. When it comes to just the very basic knowledge of our natural world, we're incredibly lacking. Just the other day, someone tried to tell me a spider was not an animal.

How did we get here? More importantly, how do we recover?

Children are born curious and open-minded, waiting to explore the world - they aren't born fearful... they learn it. They learn to have compassion. They learn to express empathy. Parents, teach your children well. Take a moment every day to kindness. 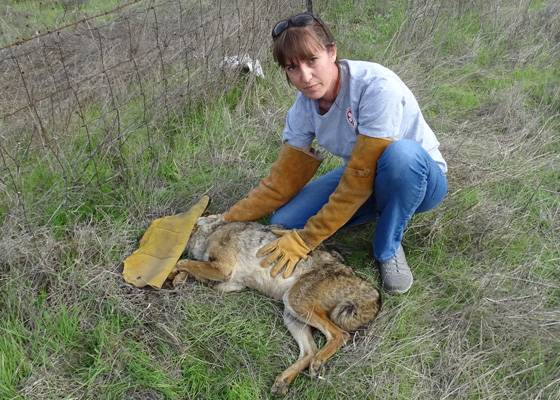 Yesterday, a coyote was struck by a vehicle on Highway 101, northbound, in south San Jose. It was reported in the right lanes. At least two people notified local agencies, but none recovered the animal.

This morning, we were notified by one of those parties that the coyote had not been rescued and was still alive, lying in a field up against a wire fence - apparently too badly injured to climb over it.

We immediately initiated a response.

Because it involved a major highway, we'd need Highway Patrol or another agency to assist. Warden Hampton with the Department of Fish and Wildlife made himself available.

We also reached out to our on-call veterinarian, Dr. Chad Alves. He could evaluate the animal's condition in the field, and if the coyote was too badly injured he could euthanize it then and there and save it from the trauma of transport.

We convened in a parking lot just south of where the animal was reported. There, we assembled our capture nets, distributed heavy gloves and went over the rescue plan.

Planning is one of the most critical parts to a successful rescue. Rescuers must plan smartly for the safety of the people involved and the welfare of the animal. We cover this in great detail in our Wildlife Search and Rescue class (register for one of our 2017 classes, HERE) where we practice what's called Operational Risk Management, adapted from the U.S. Coast Guard's training - check it out, HERE.

None of us had driven by to check out the scene, so we based our initial plan on what information we'd received from Robert, the reporting party, who had driven by earlier to confirm the animal was still there and alive. He'd sent a couple of images which helped.

As a team, we looked at the pictures and we went over how we were going to approach the animal and the What Ifs. Then it was time.

Thankfully, Robert had left an orange cone on the shoulder of the freeway to mark where he'd seen the coyote. We pulled onto the shoulder - the rescue truck in front with the Fish and Wildlife vehicle behind us. There, we spotted the coyote - tucked against a wire fence, lying flat - motionless. It didn't look good.

Check out the video of the rescue.

The rescue went smoothly - everyone did an excellent job, but, the animal was in really bad shape. To be sure, we drove to a quiet parking lot nearby where Dr. Alves could sedate him and perform a through examination. 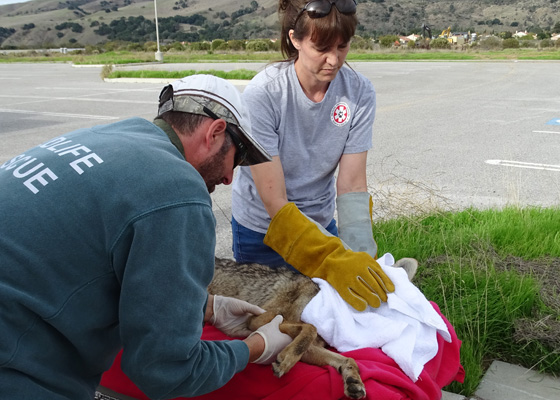 The dog's front right leg was fractured, almost at the joint, and his urine was dark brown, indicating severe internal injuries, or possibly infection, and, there was blood in his stool. He also had an old mouth injury - an oral nasal fistula and missing upper canines, and his jaw appeared out of alignment.

The hole in the roof of his mouth and missing canines was a puzzlement. Was he born without upper canines or did he lose them in the accident that caused the fistula? Had he been shot, or attacked by another animal? He was, otherwise, in excellent body condition with a beautiful coat - how was he able to survive so well? 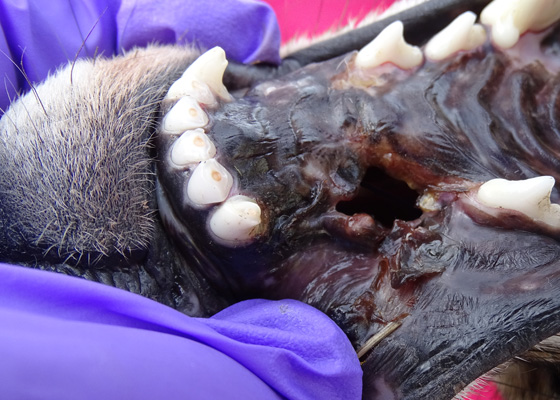 Due to the combination and severity of his injuries, Dr. Alves believed euthanasia was appropriate. The coyote went peacefully.

Thank you to everyone who helped rescue this poor wild dog!