Community comes together to save raccoon 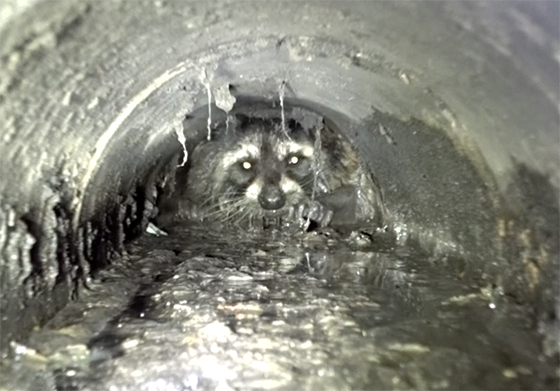 According to reports, at about 3 AM on Dec 30th, a homeless man heard grunts and cries coming from a drain in a parking off Freedom Blvd in Watsonville CA, right in front of La Princesa Market. He called the police to help. After confirming an animal in trouble, the police called on the Santa Cruz County Animal Shelter. Carlos responded.

The raccoon was tucked back inside a drain pipe. The catch basin was only about a foot and a half deep, but the drain cover - the grate, had been sealed closed with asphalt. The local Fire Department was called on, but they, too, could not break through the cover.

Later in the morning, the property manager got his plumber to break away the asphalt and remove the grate. This was about midday.

Carlos got a look at the animal. It was an adult raccoon inside the pipe - about 8 feet away, and stuck, tight.

Carlos called us to see if we had any ideas on how to help this poor creature.

I was on scene by 3:00 PM. The animal's moans were unlike anything I'd ever heard. It's unusual for an adult animal to cry out, so, this meant the animal was in extreme distress. Just heartbreaking.

By the time I arrived, water had started to collect around the animal's body. Every time it tried to rest its head, it's mouth and nose went into the water. We needed to get that water level down, fast!

We used shovels to remove some of the sludge at the bottom of the catch basin to allow water to drain away from the raccoon. Mo, with La Princesa Market helped scoop out the water. Thank you, Mo!!!

Then, Carlos and I then ran through possible rescue scenarios, but none of the usual tactics or tools would work in this case.

We called the City of Watsonville Public Works and Utilities to see if they had any ideas - any devices for storm drains that might help us un-wedge this poor animal.

Henry Cervantes, Utility Crew Leader for Watsonville arrived in about 15 minutes. He scoped out the situation and agreed with my suggestion - that the only way we're going to reach this animal is if we cut through the asphalt to the pipe.

That plan didn't set well with Bill, the property manager. He would not grant us permission to dig up the newly paved parking lot... but, the property owner, Shirley - a real animal lover, gave us the go-ahead... under one condition - that we put it back the way we found it.

It was close to 5:00 PM. Carlos needed to clock out, but he would return to volunteer. Henry, too, said he'd return to help. Duane had been working all day in Monterey - he stopped by our home to grab shovels and other tools. Mary Dalton, one of our star volunteers and member of Native Animal Rescue (NAR), drove to Home Depot to pick up a masonry saw we rented. NAR's raccoon rehabilitator, Monique and her son Ronan were on the way with first aid supplies.

By 6:15 we were making the first cut. Henry made it look easy! 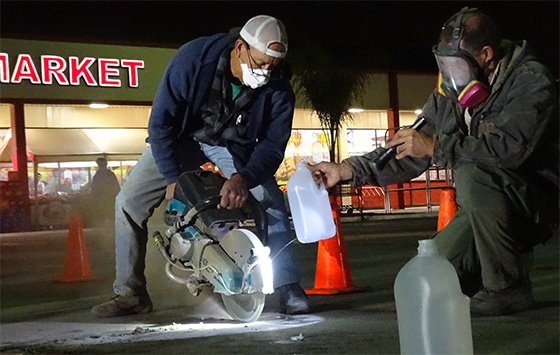 But, the handheld saw would only cut so deep!

Henry took out his cell phone and placed a call. I overheard the start of his conversation with one of his crew. Hey, Alex, what are you doing right now? (You know it's not good when your boss calls you at 6:30 on a Friday night, right?).

Wow! Alex Torres and this ginormous utilities truck was on site by 7:00! (These guys are FAST!) 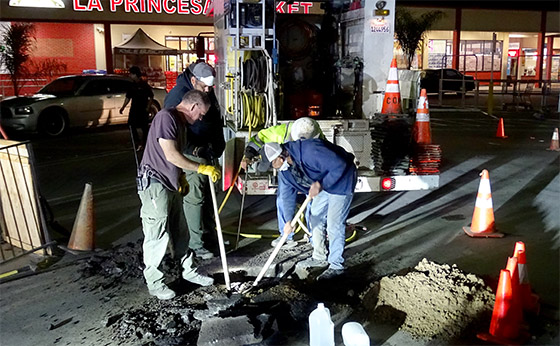 Then the jackhammering began. Then the shoveling of hard-packed decomposed granite. Then finally they were close - they used a probe to find the pipe. Then more cutting and shoveling.... Finally, with the cement pipe exposed, they started cutting through. Once again, Mary helped by going back to Home Depot for diamond wheels for the grinder.

By 9:00, the pipe was opened up. Wearing heavy leather gloves, Duane reached inside the pipe. The smell was awful.

Duane felt one rear leg and a tail. He tried to pull gently and push, but nothing. No movement. I tried. I let the animal push back against my hand, but no movement at all. He was in real trouble.

We needed to get to the top of the pipe that was holding the animal down. Earlier, we'd marked the pavement where the animal's body was. The guys got to work digging towards the front of the raccoon.

By 10:30, the length of the pipe was exposed and the team had sliced through the sides of the cement.

Using crowbars, the team started to pry open the pipe, relieving pressure on the raccoon. Carlos was ready wth the net in case it bolted. Monique and Mary were ready with the animal carrier, but, sadly, as the pipe was lifted, there was little movement.

Duane managed the large raccoon from the pipe and placed him on warming pads inside the carrier. It was still alive - unresponsive, but alive.


Monique and Ronan rushed the raccoon to a veterinarian in Santa Cruz who was willing to treat him.

The raccoon survived the transport. It arrived alive but unresponsive.

He was severely hypothermic - his core body temperature was so low it didn't even register on a thermometer. He was also severely dehydrated and shocky. They wrapped him in warming blankets and began administering warm fluids intravenously - he took 300 ML!

By 1:00 AM, he was looking a little better. His temperature began to register. There was hope.

The veterinarian believed the large male raccoon had been entrapped for over 24 hour - possibly a couple of days. A closer inspection revealed he'd lost a couple of digits in his struggle to escape. Heartbreaking. 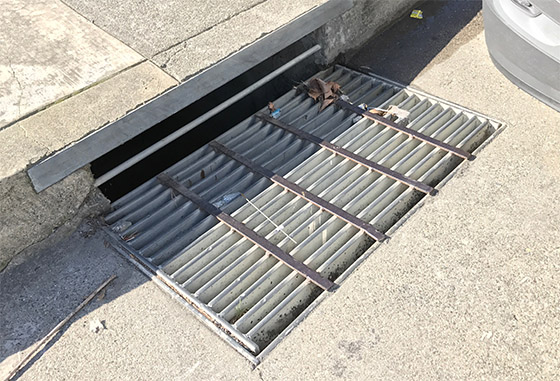 In the end, we believe the animal entered the shopping center's drainage system through an open storm drain. We think he just took a wrong turn that led him into a pipe that got tighter and tighter. With no way to turn around and a resistance to backing up as far as he'd have to - the raccoon struggled forward with hope of finding an exit. Eventually he got wedged in so tight he couldn't budge.

We believe the raccoon had been in the drain longer than a day, and, like the veterinarian said, it's body was shutting down. It had just been too long. We believe something called exertional/capture myopathy also played a role in its death. Explained HERE, exertional myopathy is where an animal strains too long, and there's no bringing them back. They can die immediately, or hours, even days later.

So sad. So much effort went into trying to save this one animal's life.

While the final outcome was unfortunate, we did what needed to be done. It was the right thing to do.

Going into the new year,...if I can get a little personal,... this is what I want to do more of - the right thing.

We all have that little voice inside, you know... those internal conversations where we weigh our decisions... What's the right thing to do?

This rescue recharged my hope in humanity. Belief that most little voices know to relieve suffering is the right thing to do, regardless the species, and that to go to great lengths is acceptable.

Carlos, Henry and Alex chose to spend their Friday night jackhammering into a parking lot, and Shirley, such incredible kindness and trust. It just shows what we can do when we band together - we accomplished something that at first seemed so implausible.

Anyway, a huge, huge THANK YOU to everyone who helped with this rescue!!!

Oh, and maybe some of you are wondering about the parking lot...

We spent all day yesterday trying to get the hole filled. Duane found a pipe supply house that was open on a Saturday - even on a holiday weekend. He cut and mended the pipe, and by afternoon I'd found someone to fill the hole with cement slurry and made arrangements with the paving company to patch it on Tuesday. Duane and I and a friend cleaned up the pile of asphalt chunks and decomposed granite, and swept up. Special thanks to Z. A. for helping us out. 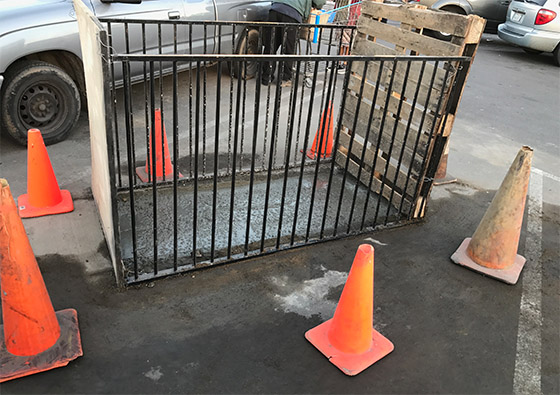 A very nice acknowledgement from PETA. 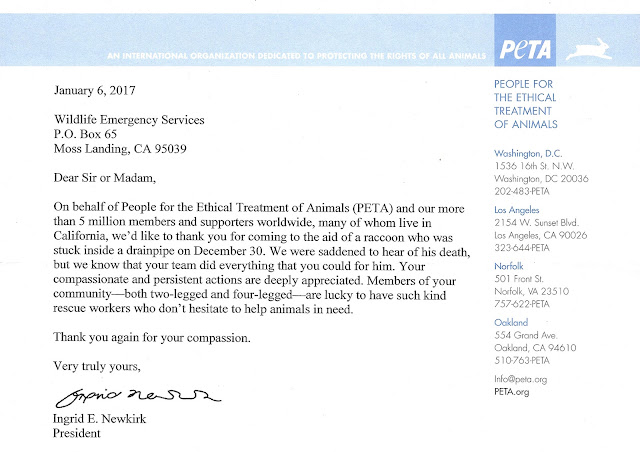