On Sunday evening around 7:00 PM, at the Christmas Hill Park in Gilroy, a family witnessed an adult male pull a humane trap from the trunk of his car. It contained 5 newborn raccoons.

He then dumped the raccoons in the grass between the entry parking lot and the creek.

We are offering a $1,000.00 reward for information leading to the arrest and conviction of the person(s) responsible.

The man indicated he lived a couple of miles away from the park. Does anyone know who this person is? If so, contact us - anonymously if you choose, at admin@wildlifeservices.org.

Amazingly, the baby raccoons survived the night without their mother, without food or shelter, exposed to the elements. They were rescued by Native Animal Rescue and transferred to the SPCA of Monterey County where they are being cared for. 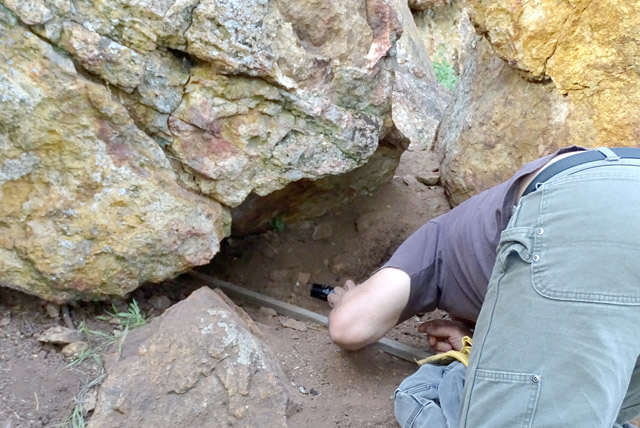 Last Thursday, Almaden resident Chuck Rossi contacted a local wildlife hospital about 5 coyote pups in a den on his hillside property. He and his family had been keeping a close eye on the coyote mom and her pups using a security camera turned "coyote cam". That's how they knew, for sure, the mother had not returned since the night before. Check out the mom feeding her pups, HERE.

That same morning, a female coyote had been found dead about a half a mile away on Alameda Expressway, presumably struck by a vehicle. As time went on, it became clear, this was the mother coyote.

The natal den was a small space that had been excavated under large boulders on a wooded hillside between homes. The den went back under the boulder about eight feet and had 4 separate entrances.

After initial attempts to extract the pups were unsuccessful, WES was called to help.

We didn't want to take the pups into captivity if they had a chance to grow up wild, so we reached out to a biologist who studies urban coyotes in the Los Angeles area. According to his research, other adult members of a pack will sometimes help raise the pups, but, since there hadn't been any "helper" coyotes in the area, the only chance for these pups would be in the care of humans.

Early Friday morning, WES responders placed a large dog trap baited with dead mice, just outside the den entrance. The trap was modified so it could be triggered manually. 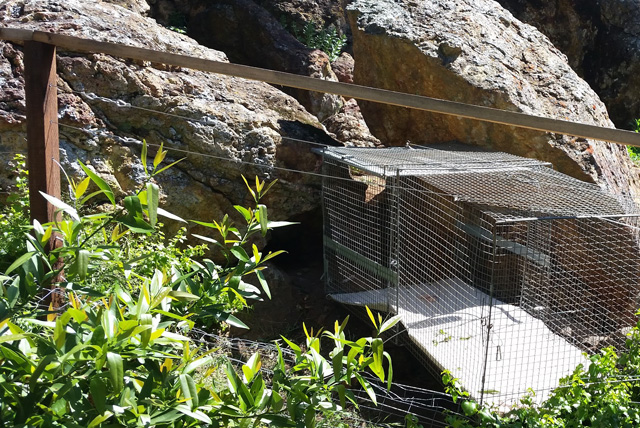 The pups were so frightened, though, they stayed close to the den's entrance and didn't venture deep enough into the trap.

On the third night without their mom, one pup, desperate for food, did explore the trap and was captured, but the rest stayed together under the boulder. It was transferred to the wildlife hospital.

By the next day - Sunday, the situation was dire. The pups had not eaten much of the food slurry that was left for them. Time was running out...

We arrived on scene at about 6:30 PM. First we tried to encourage the pups out into the open by making noises at the back of the den. When that didn't work, they started to dig out the front entrance.

At one point, at least two of the pups could be seen, but then they tucked themselves deeper under the boulder and out of sight. 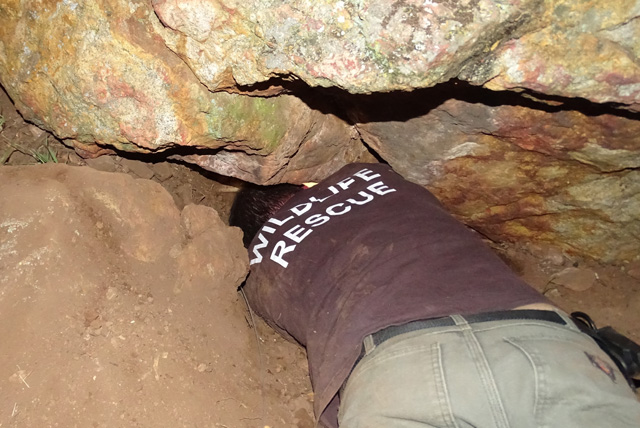 Finally, while working all the entrances to the den, Duane saw one of the pups through a small opening. He caught hold of it with grabbers but it wouldn't fit through the hole. Using a crowbar he was able to dislodge a large rock and lift the pup to safety. Check out the video below.

The team continued working, well into dark, digging out the den, using flashlights and scopes, but the pups stayed hidden. Just as they were starting to lose hope of finding the pups, the resident brought out a small thermal imaging device that could detect a heat signature.

Amazingly, it showed exactly where the pups were hiding - up and to the right.

Duane squeezed himself into the den as far as he could go, and, using a makeshift noose, he was able to snare two of the pups. The fourth was caught by hand as it was trying to leave from one of the back entrances. 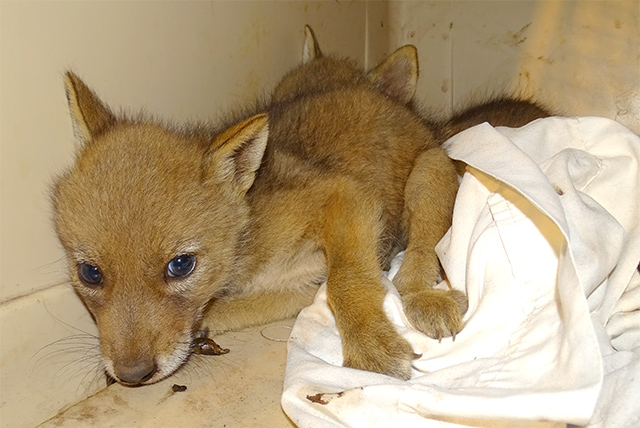 The pups were immediately transferred to the wildlife center where they received fluids for severe dehydration. They are expected to recover and be set free when they are able to survive on their own.

Thank you to everyone who helped in this rescue, most especially the Rossi family who took such extraordinary measures to help these beautiful creatures.