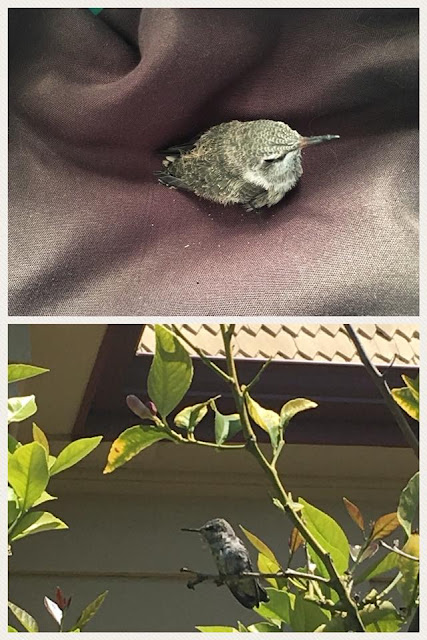 In the late afternoon of 4/15, I received a message from a lovely woman I had met from a previous rescue. This time she was concerned about a possibly orphaned hummingbird in her backyard.

Her children had noticed it on the ground beneath the trees while they were playing. She was unable to find the nest, but carefully placed the tiny bird up high and made sure that everyone, including the family pets, were brought inside to give the parent bird the opportunity to care for it.

She watched and waited, but nothing happened.

I asked several questions over the phone and while her answers prompted concern, I thought perhaps the feeding had happened so quickly (we’re talking seconds!) that she just didn’t see it. So, I drove over to the residence to see for myself.

This time of year I spend a lot of time educating people about nestling and fledgling birds, often telling them to “put it back.” So the last thing I wanted to do was rescue a bird that didn’t need to be. The family and I watched quietly from a distance for nearly an hour, and although the fledgling was peeping loudly and there were adult hummingbirds flying through the area, sadly, none showed any interest in this little one.

As the sunlight was quickly fading, I gently picked the bird up and placed it in a small carrier. It was hydrated and kept warm overnight and transferred to the wildlife center the following day.

Staff confirmed this Anna’s Hummingbird wasn’t sick or injured but thought perhaps it had fledged prematurely. The bird received supportive care and after just a few days, began to self-feed.

I had the pleasure of returning this little one “home” today. As soon as I opened the box it flew to the branch of an orange tree and rested for a moment before zipping away.