Another dying bobcat, and there's a very good chance it's linked to an anticoagulant rodenticide, as research suggests.

This afternoon, WES' San Benito chapter was alerted of a sickly bobcat in rural Aromas. According to the reporting party, the cat crossed Anzar Road and disappeared into the brush, headed towards her neighbor's home. She described it as having two red ear tags - a research cat!

I have since learned she, known as B33F, was ear-tagged in June, 2018. At that time she was a healthy young bobcat.

Thankfully, the RP was kind enough to get us in touch with the neighbor and we received permission to search the property.

I arrived within 2 hours. Ascending the steep driveway in the rescue truck, I saw the cat. It was huddled in the grass, just off the pavement, in the last bit of sunlight. Its face had the classic dark features, confirming it was suffering from mange, which has been linked to anticoagulant rodenticides.

Having been spotted by the cat, I drove passed it without slowing and parked about 25 yards away, out of sight.

I walked back to assess the cat's condition - to see how it would respond - how quick it would notice my approach, if at all. This initial evaluation helps rescuers determine the method of capture.

The cat had disappeared! Had it gone through the barbed wire fence into the field of cattle or into the gulch, or was it close, hiding? Perhaps in the snaggly conifer or coyote bush?

I crossed through the barbed wire fence and as I was scanning the dry gulch basin, all of a sudden, a scrub jay alarmed right behind me in the conifer!

Sure enough. There, at the base of the tree, sheltered under low hanging branches, was the bobcat.

SO small, so thin, so desperate.

Thankfully, it was still on the property where we had permission to work, and I needed to keep it on this side of the barbed wire. That meant any approach would need to be from the property line.

When preparing for a wildlife capture, rescuers use their knowledge of a species to predict the animal's response to pressure, or approach. What will be its direction of travel? For example, with stranded sea birds, we know they will head for the water, so we stage between the bird and the water.

In Wildlife Search and Rescue we refer to this step as the Potential for Success, where you take into consideration all the things that could happen during the rescue, and build the best possible plan for a successful mission. No one gets hurt. The animal is not harmed any further, and, hopefully, no property is damaged. We've found the Coast Guard's Operational Risk Management exercises particularly helpful in planning for safety. 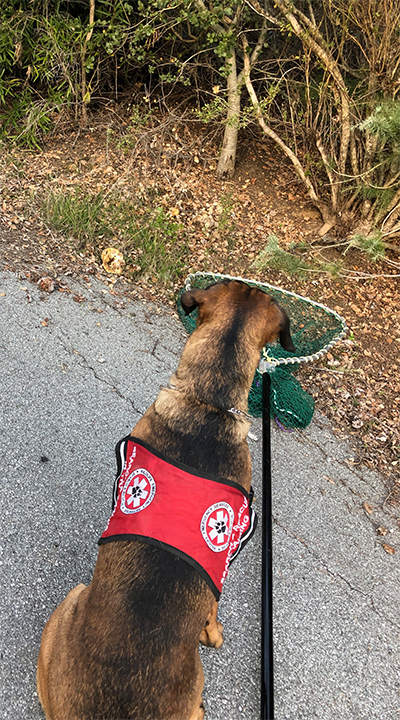 So, in considering the animal and the landscape and the time of day and there being only one capturer - me, I thought to employ the help of my trained Kentucky Labrador, Angus.

We approached the cat under the snaggly tree from downhill and at the property line, next to the barbed wire fence, hoping to drive it deeper into the property - maybe even into a tree.

Sure enough, the presence of the dog applied just enough incentive to get the cat to move from under the low branches and into a thicket of ceanothus and coyote bush.

There, Angus kept watch while I gathered equipment.

Carrying a long-handled hoop net, I approached the cat. The dog circling the bush kept its attention.

Finally, I was just feet away and had a fairly clean shot. As if chucking a spear, I jabbed the leading edge of my net down through the brush, lodging it just behind the cat, which predictably jumped backwards, away from me, and into the netting.


Only one problem - the netting material was tangled in the stickery branches, preventing me from laying it flat. I had to get on the ground with the now growling and pissed off cat and slowing release the material, one section at a time, until there was enough slack to create a "bag" to hold the bobcat securely.

After struggling with the ceanothus branches for at least five minutes, I finally had the cat in the bag. I twisted the hoop so it could not escape. Truthfully, I don't think it had the strength to try.

The cat was in really bad shape. Alert, just enough to be able to strike and bite, but barely. It would die tonight, I was quite sure.

None of the wildlife centers was open. Even if one had been, the most heroic efforts haven't been enough to save bobcats that are this far gone. It was just a matter of time.

Wanting its last hours to be as peaceful as possible, we placed the bobcat on a warming pad in an isolated area and periodically checked on its condition. 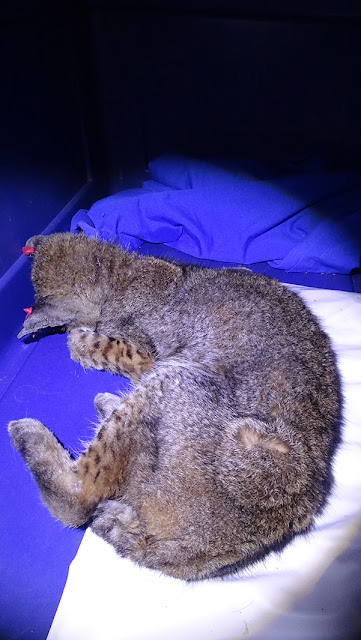 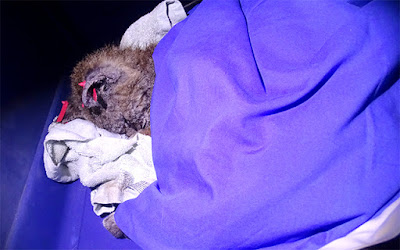 We have good reason to believe this bobcat was exposed to poison from eating rodents that had consumed bait containing a second generation anticoagulant.

Because of the diligent, dedicated and thorough work by so many people over the last few decades, we have solid evidence that proves, at the very least, our wildlife is being contaminated by the widespread use of anticoagulant rodenticides, if not also establishing a link between these poisons and the death of predators like this bobcat.

The mounting evidence - this cat included - should be enough to justify the ban of anticoagulants, but will it be?

This fight, is not new. In 2008, after many years in deliberation, the Environmental Protection Agency concluded through a risk evaluation that certain anticoagulants posed an "unreasonable risk" to children, pets and wildlife. The powerful pest control industry fought the EPA's decision, delaying cancellation of certain products. In 2013, California conducted its own analysis of anticoagulant rodenticides. Finally, as of April 2015, second generation anticoagulants are no longer sold over the counter in the united States, however, they are still widely used in the pest control industry. For the Industry, it's about money. Profit.

But who feeds the Industry? We do.

More pressure must be placed on end-users of these poisons. Restaurants, hotels, businesses - many are unaware of the impact the "little plastic boxes" have on our wildlife. They need to be informed and encouraged to switch to a safer product or means of controlling rodents.

A bit of good news - just recently, the California Department of Pesticide Regulation announced it would consider reevaluation of certain anticoagulants. A huge THANK YOU! to those who sent letters in support.

We're looking forward to this reevaluation process. WES will be there on the front line, providing testimony as to the animals we have lost because of these poisons, and, my corporation will be countering claims by the industry that they don't have alternatives, when we know, for a fact, they do.

Not long after her capture, the bobcat took her last breath.

At one point during the evening when we checked on her, she appeared to be unconscious - unaware, but running?

My mother described my grandfather's hand movements just before he died - he was unmistakably picking cotton. Some ingrained movement - something he never forgot.

Giving way to tears (that come hard these days), I could only hope this cat's last dreams were of running in the wild wood. Go gently into that good night dear cat.

UPDATE: B33F's body was sent on Thursday January 24th to the State's Wildlife Investigations Lab to be necropsied and tested for rodenticide exposure. A huge thank you to the biologists and veterinarians and researchers at the Lab for their incredibly valuable work.

UPDATE: Test results confirmed she was exposed to rodenticides from consuming poisoned rodents. Her liver showed 300 ppb of brodifacoum, 52 ppb of diphacinone and a trace amount of chlorophacinone.

Exposure to the poisons compromised the cat's ability to hunt. She was severely emaciated and suffering from serous atrophy (gelatinous transformation).

These poisons are the new DDT. Silently killing our nations predator species. This has got to stop.


WES is a small all-volunteer-run nonprofit. If you would like to make a donation it would be very much appreciated.