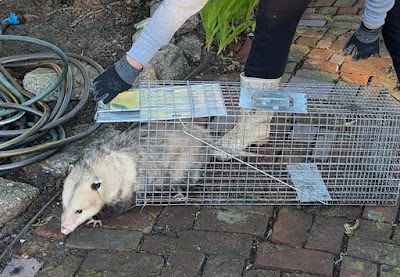 This morning, we received a call from a resident in Pacific Grove to help with an opossum in a trap.

She had hired a local pest control company to get rid of skunks from under her home. Unfortunately, the company set cage traps before addressing the actual problem - the hole leading under the house.

According to the RP, a raccoon had been trapped the day before and was allowed to sit in the trap until 3 PM when the owner of the company finally showed up - and killed it.

The trap was within 150 yards of other homes, which, per Title 14 CCR 465.5(g)(3), would require the person setting the trap to obtain written consent from all surrounding homeowners within that range.

Subsection 465.5(g)(3) protects people, children and pets from being harmed by traps, including the body gripping snare and conibear - still legal in California. This regulation also gives neighbors a legal right to a say in what happens to their shared natural resources - the neighborhood wildlife. Plus, it forces trappers to think outside the box(trap). 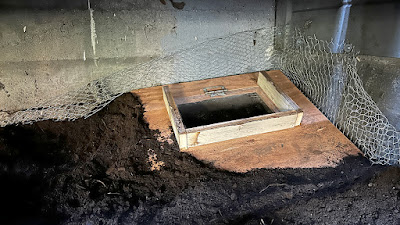 WES responded and immediately released the opossum on site and, at no cost to the homeowner, installed a one-way device to provide any animals still under the house, a way to escape safely.

Read our review of this company on Google Maps, HERE.