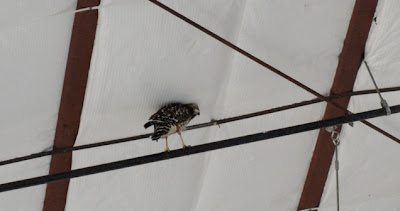 A few weeks ago, we predicted a rise in raptor entrapments. Sure enough, there's been an increase in trapped hawks.

Accipiters, the swift-flying, bird-eating hawks are typically the ones that get into trouble. It usually involves them going after prey near an open doorway, where the momentum of their dive sends them through the portal.

Once inside, the hawk panics and heads for safety - which is, instinctually, up.

There, flying inches from the ceiling, back and forth, navigating pipes and wires and ductwork as it would a tree canopy, the hawk remains, confused and trapped, until it is either drawn or driven out of the building, captured, or weakens until it cannot fly.


Where there are skylights or high windows, birds become even more disoriented and at greater risk of suffering severe, even fatal, injuries or perishing from exhaustion.

We find the most common reaction from people who discover a trapped bird is to try chasing it towards an exit. This only causes the bird to panic more.

Freeing birds from buildings is extremely labor intensive and time consuming. Safe and effective rescue strategies are based on the layout of the building and the bird's behavior, minimizing potential harm to the animal, while maximizing the potential for success.

This week, we faced a significant challenge. A young Cooper's hawk entrapped in a parking structure in downtown San Francisco.


The ground-level parking structure is lined with large, tall, grated windows. The doors, also grated, raise to let cars through, then close again.

WildRescue was first notified of the hawk on August 16th, when Joseph, a security guard for the downtown apartment complex, called to report it being trapped for two days. We immediately alerted our Bay Area responders and San Francisco Animal Care & Control (SFACC).
Officers from SFACC responded quickly and tried to encourage the hawk towards the front of the building where the doors were held open.

Members from Golden Gate Raptor Observatory (GGRO) also responded and used lures to entice the hawk toward the entrances, but with no luck.

A week passed. Fortunately, the hawk had been feeding on pigeons and smaller birds, so she was still fit and agile.

This morning, WildRescue's founder and director, Rebecca Dmytryk, traveled to the city to lead another rescue attempt. She was assisted by Eddie Bartley and Noreen Weeden from Golden Gate Audubon Society, and Officer Ellie Sadler from SFACC. 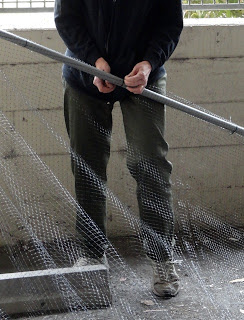 The team began by observing the bird, watching its pattern of flight and identifying the spots it preferred to perch. They used this information to choose a corner of the garage to section off using lightweight netting material.

The plan was to drive the animal into this smaller area and confine it. The hawk would then either hit the netting and drop down, where it could be funneled out the open garage door, or it would be netted by hand.

Check out the video of its rescue below.

A huge Thank You to everyone who helped return this hawk to freedom!
If you want to be part of our response team so you can help out on rescues like this one, please fill out an application and waiver and send it to rebecca@wildrescue.org.