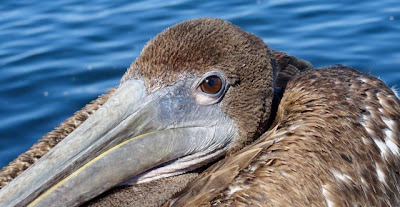 I'm in trouble.  I'm now dreaming pelicans!!!  Last night I dreamt I was on a long pier that went out into the sea for miles and miles.  I backed my truck onto the pier, opened the back and started loading pelicans, lots of them, all tied up in line, and I just kept driving back and forth loading pelicans for hours......until I woke up.
Searching for injured animals and strategizing on their capture is both exciting and incredibly rewarding, and, it can be habit forming, as one of our responders has found.

Lately, Deanna has been doing her 'rounds' on the wharfs in Monterey where there have been plenty of birds in trouble. Some have been found wet from fish 'oil', others observed choking on discarded remains of freshly filleted fish, and there continues to be an abundance of fishing tackle entanglements, and sea lion bite injuries.

As I made my way to the entrance of the wharf, I could see a large group of pelicans swirling around a fishing boat that had just come in. I quickly made my way to the feeding frenzy where I spotted several pelicans with line dangling off their bodies. They were perched on the railing of the bait cleaning station.

Unfortunately, before I could make a move, they flew from the pier to the water below where fisherman had tossed scraps of fish.

I waited, hoping they'd fly back onto the pier, when I heard a commotion - people yelling and pointing to the water. Two pelicans had become tangled together by fishing line. They were thrashing violently in the water, desperate to free themselves.

Fortunately, it wasn't long before they broke free and the one trailing the line landed on a railing nearby.

With bait in hand, I knelt down and tossed a few scraps on the ground, hoping it would hop down for a free meal, but instead it just stood looking at me. I needed to try another tactic, and maybe something more wriggly.

I stood up quietly and then slowly approached with a slippery piece of squid, but instead of focusing on that particular bird, I kept my eyes on a pelican to its left - one that seemed a bit more keen on my offerings. I kept inching forward, fiddling with the squid. 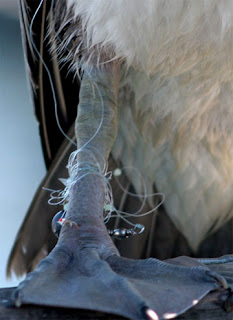 Eventually, I was standing in front of the second bird, with my mark just six inches from my right hand. I waited, patiently, for that perfect moment.

All of a sudden, the pelican turned its head to preen - I threw my right hand out, grabbed its bill and guided the bird onto the deck.

Line was everywhere, wrapped around its body and through its feathers. I needed help untangling it. I yelled toward a crowd of bystanders, and a women stepped up. It turned out, she was a volunteer with Native Animal Rescue in Santa Cruz. Perfect.

As we untangled the bird just enough for it to fold its wings normally, I got a better look at its injuries. There was a hook imbedded in the top of its right foot and line wrapped around its leg, beneath its right wing, around and over where another hook was sticking out of its body.

Other than the line, the bird appeared healthy, strong and feisty and putting up a good fight. I delivered the pelican to the SPCA Wildlife Center. From there it was transferred to International Bird Rescue in Fairfield for rehabilitation. I have no doubt this bird will be back in the wild in no time. 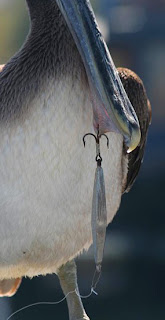 During my visit to Fisherman's Wharf this week I spotted a pelican with a huge lure hanging from the flesh of its pouch. I first noticed the bird when it flew over my head and the sun reflected off the metal. It looked like SOS signals as the bird flew by!

I watched the pelican land and went over to see if I could bait it in close enough to catch. The bird was very timid, and quickly flew off and onto the roof of one of the restaurants where it stayed put.

The next day, I was joined by Rebecca. She arrived early to locate birds that needed help. By the time I got there, she'd located the 'flasher' and also another pelican snagged by hooks - one in its mouth and the other, on the same line, embedded in its foot.

Both birds were settled atop one of the wharf's restaurants. They showed no interest in the fresh bait we were offering. Even when the fishing boat pulled in, they stayed on the rooftop. 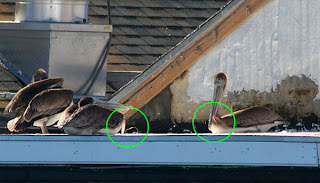 We decided to flush them from their roost and hope they landed where we could get close to them. Through an open window below, I was able to spook them using a broom (courtesy of the restaurant). It worked. They took off and flew over the docks where Rebecca was tossing bait fish to entice them to land. The double-hooked pelican landed near the whale watching office and was captured by staff!!!

The 'flasher' circled and landed back on the same rooftop. We did not want to scare it again - that's the last thing we need - for it to be even more wary! 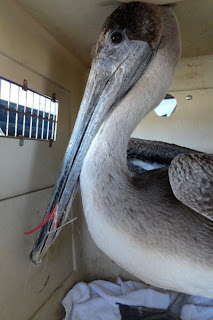