This rescue was sponsored by Bodhi Matus 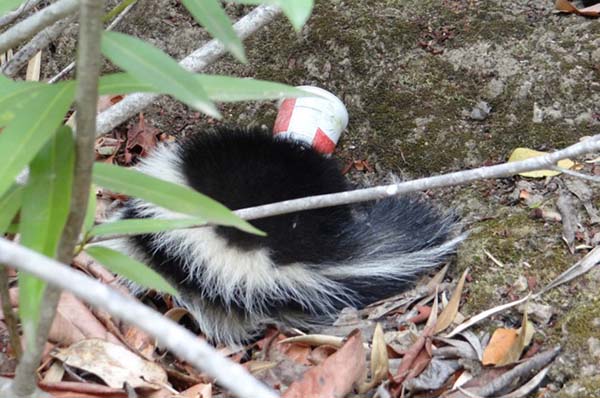 Yesterday morning, we were contacted by a resident who lives in the beautiful, wooded Santa Cruz Mountains of Los Gatos. His dogs had alerted him of something in the yard. When he went to investigate, he found a skunk with its head stuck in a Yoplait yogurt container, shivering at the base of a retaining wall.

Because of how his dogs had been acting for the last couple of days, the skunk may have been in trouble for a while. Not being able to eat or drink, and fighting for air, the animal would not last long.

WES founder and lead responder, Rebecca Dmytryk, rushed to the scene. Here's her account of the rescue:

The home was located way, deep in the mountains - very rural, few fences, and lots of acreage between neighbors. Quite lovely. Odd, though,... I thought,... to find an animal caught up in garbage in such a pristine, unpopulated area. It must have broken into a recycling bag or garbage bin.

When I arrived on scene, the RP, Gary, led me to the skunk. It was tucked up, sleeping, under a bush at the top of a pretty steep and slippery slope. 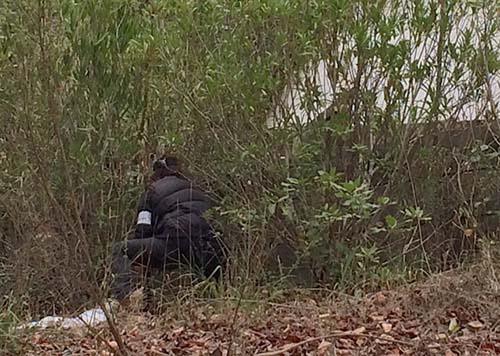 It was a bit of a challenge to reach the skunk. There was no way to stealthily sneak up on it, with the dried leaves and twigs and snapping of branches, but, the skunk kindly tolerated my noisy approach, at least until I grabbed hold of his tail.

If... if you can get hold of a skunk's tail and tuck it under, it might squirt a little juice, but it won't spray all over. Just FYI.

I used a bed sheet to shield me from spray as I maneuvered close. Once on top of the skunk, I slowly placed my gloved hands over its body, with little fuss, then clutched its tail to pull it out from under the bush. It wasn't capable of biting, so I focused on getting control of the sprayer.

I pulled the skunk to me, folding its tail under, and "burrito-wrapping" it in the sheet before tucking it between my legs to get a look at the cup - maybe I could remove it right there.

I gently pulled on the container, thinking it might slide right off, but, no. I pulled a little harder. Nope. Wow! 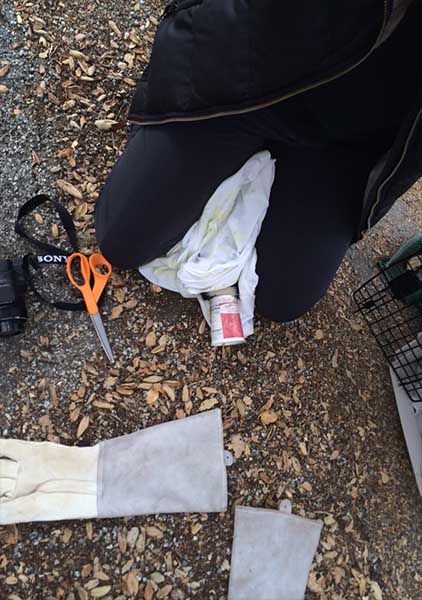 I carried the bundled skunk to a more comfortable spot where I could work on it. I cut the rim of the cup, then an inch more, then had to manipulate the plastic back to get it off the animal's face - it was REALLY on there!!!

There it was - the skunk's lovely face. It looked SO relieved. It just sat there, not struggling, but just taking in the surroundings - it could see again! It bobbed its head up and down taking in the crisp, fresh air.

Not knowing how long it had gone without food and water, it would be held overnight and given a chance to recuperate before being set free. 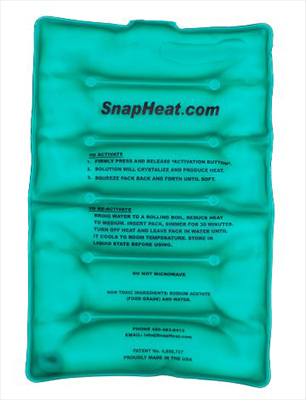 First, though, we needed to treat it for hypothermia, as it had been exposed to the elements overnight.

I placed the little skunk into a transport container that was outfitted with a large SnapHeat pad. These are portable and reusable heating pads that can provide warmth for hours.

After a full day of rest and a good meal, the skunk was given a final once over and deemed ready for release.

Late this afternoon, I transported it back to the mountains, and found a safe spot off the roadside, below the property it was taken from. There was a culvert for it to hide in and a very old hollowed out redwood.

Check out the video of the skunk's rescue and release:

There's even more to this story... As I was setting up the cameras for the release, a neighbor drove by, headed home. He slowed and rolled down his window. I started off the conversation with "What is this strange person doing on My Road, right?", and proceeded to tell him of the skunk with the Yoplait container on its head. He said he'd seen that skunk. What? Really? "Around Christmas," he said.

He was positive. He recalled telling the story at a Christmas party, about how he saw a large skunk with a red yogurt cup stuck to its face and it was trying desperately to get it off, but didn't know what to do or whom to call.

This was definitely not the same skunk. It could not have lived without food and water for so long. We can only hope that skunk was able to remove the container from its head...

It's a bit of a mystery. Was there one Yoplait container or two? The code on this particular cup reads 00323. If this is a Julian date, it reads November 19th. Hmmm.

Also interesting, the aluminum foil top to the yogurt container was folded up at the bottom of the cup, as if the consumer had thoughtfully placed it there - perhaps thinking to recycle all of it. Perhaps the skunk(s) tore through a bag of recyclables?

Either way, let this story be a reminder to all - please crush or cut up Yoplait containers before discarding them.

As for General Mills, makers of Yoplait - CHANGE THE DAMN DESIGN OF THE CONTAINER!

WES has launched a campaign on Change.org, asking General Mills to remove the flange from the "vercon" cups to make them less hazardous to wildlife. Please add your voice and sign the petition, HERE.