General Mills: It's time for a change... 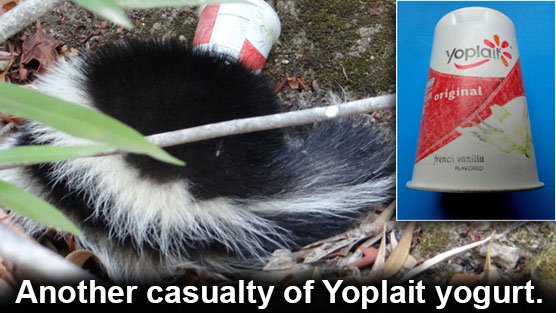 Last week, we responded to an incident in Los Gatos involving a skunk with a Yoplait yogurt cup stuck on its head. Read the story and watch the video of its rescue, HERE.

Unfortunately, this sort of injury isn't as uncommon as you might think. Potentially thousands of small mammals get their heads stuck in Yoplait containers every year, nationwide.

Why Yoplait containers? Because of the inverted flange at the opening.

Animals can squeeze past the flexible rim to get at the bottom of the cup, but when they try to back out, the flange catches on their hide, the back of their skull, or cheekbones.

Animals in this condition are deprived of air, they are unable to see, drink, or eat. They end up wandering, blindly, exposed to the elements, and are at greater risk of being struck by a vehicle if they do not suffocate first.

General Mills, makers of Yoplait, has known about the flawed design for decades.

In 1998, under pressure from animal activists, General Mills made a few modifications, including a note on the label for consumers: PROTECT WILDLIFE CRUSH CUP BEFORE DISPOSAL, but they did not remove the flange inside the opening.

It's been 35 since these cups were introduced on the market, and General Mills has refused to make the necessary changes, citing:

"That design is a key lure for customers, and changing it could harm sales."

We’re asking consumers to show General Mills that sales will be hurt if they don't!

We have launched a campaign on Change.org, calling for people to stop purchasing Yoplait in the harmful conical-shaped cups until the company makes the packaging wildlife-safe.

Watch this story about a squirrel in a similar situation:

More videos of animals with Yoplait cups stuck on their heads:

Skunk With Yogurt Cup On Its Head
Saving a skunk from certain death.

Yoplait is not for squirreling around
Squirrel with Yogurt Cup Stuck on its Head
High on YOPLAIT!
The Yogurt Loving Squirrel
The Skunk And The Yoplait Yogurt

Skunk Junk
Stuck Skunk 2
The Stuck Skunk - good to the last drop!
Funny Skunk with a yogurt face!!
Skunk Yo Play
Saving with a skunk with yogurt container on its head!
Poor Skunk Litter Victim
Yoplait container stuck on a squirrels head :(


A huge THANK YOU to those who
bravely rescued these animals!