A mallard and her brood... 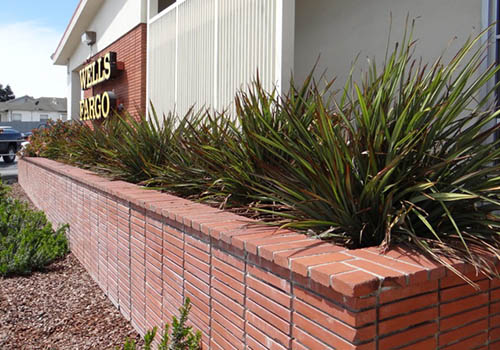 On April 1st, they received a call regarding a duck that was behaving aggressively at a very busy Wells Fargo Bank in downtown Freedom, CA. 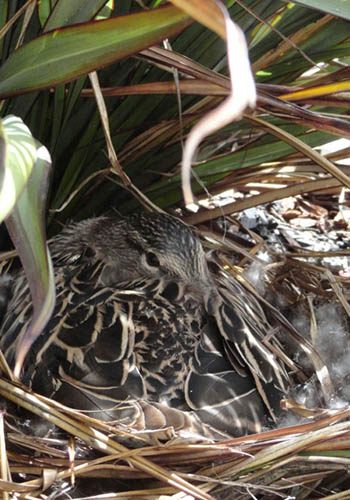 They went to check it out and found a female mallard duck nesting in a large planter at the entrance to the bank.

Wild birds and their nests are federally protected. It would be a violation of the Migratory Bird Treaty Act to disturb the duck or destroy her nest.

Dmytryk has a special permit that allows her to capture and relocate waterfowl, but only under certain circumstances - when the birds are in immediate danger or pose an immediate threat to public health and safety (like traffic accidents). 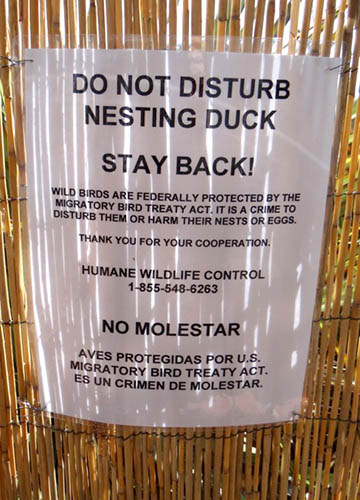 This particular hen posed no real threat to the public, but people would probably disturb her if nothing was done to protect the site.

Rebecca and Duane secured bamboo reed fencing around one side of the nest, and posted a sign warning people to stay away.

They asked the bank manager to keep an eye out and to call when the ducklings hatched. 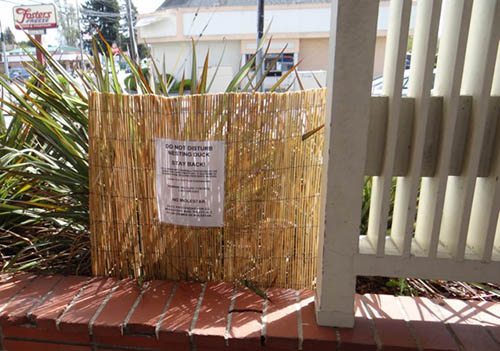 
It takes about two weeks for a hen to lay a clutch of eggs - one every day or so. During the egg-laying stage, the drake watches over the hen and guards their territory.

Once the last egg is laid, the hen begins incubating the eggs - a process that takes about 28 days. She remains on the nest except for brief periods to stretch and eat.

The male stays nearby for a short while before flying off to molt. Interestingly, it's these newly-unattached males with no "jobs" that are often seen ganging up on females until their aggressiveness passes.


Once hatched, ducklings remain in the nest for about 10 to 24 hours - until the hen decides it's time to lead them to water - which can sometimes be miles away. This journey is extremely perilous, especially in an urban environment. 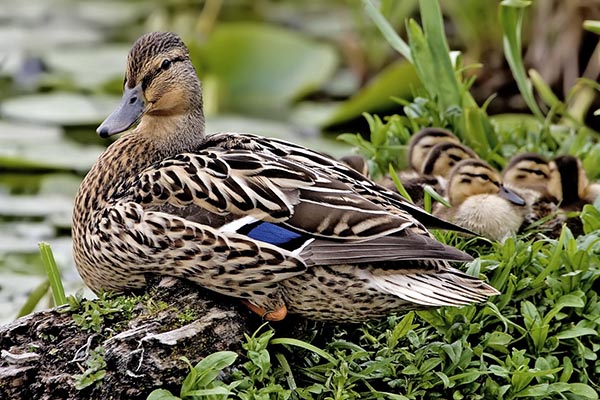 Today, WES received a call from the bank that the ducklings had hatched and were still in the nest.

Duane and Rebecca responded and found the hen quietly resting with her new babies.

While normally it's best to not intervene, except to maybe shepherd a duck-family across a busy intersection, in this case, the ducklings would be in great danger and could potentially cause a traffic accident. If possible, they should be relocated to a safer place nearby.

Capturing a flighted mallard, though, is a real challenge. They are strong birds with the ability to fly straight up.

The team talked through various capture strategies before testing the simplest and quietest approach.

Hidden from direct view, Duane lifted the bamboo fencing just enough to allow Rebecca to get her arms underneath. Mimicking a snake - something relatively small that the hen could fend off, Rebecca slipped one hand under the blind. The hen reacted immediately - hissing and striking with her bill! Rebecca kept the hen occupied with her right hand - retreating and then tentatively advancing, until she had her left hand poised and ready.

In one swift move, Rebecca grabbed the hen's midsection - like a football - keeping the bird's powerful wings tucked as she squirmed to get free.

Once released inside a small animal carrier, the hen charged the door, bouncing off the grate.

Meanwhile, Duane began collecting the ducklings, setting them inside a separate carrier.

During transport the crates were positioned so the hen could see her babies.