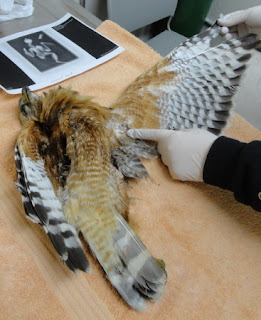 A second red-shouldered hawk has been found shot in the community of San Martin. The body of a deceased adult bird, possibly the parent of the younger hawk found shot in March, was recovered from a resident’s backyard, earlier this week.
As wardens from the California Department of Fish and Game continue to investigate these crimes, the younger bird remains in rehabilitative care at the Wildlife Center of Silicon Valley, recovering from a shot to its chest.
Veterinarians decided not remove the pea-sized pellet from the bird’s chest, as the surgery would have been too risky. Even so, its caregivers believe it has a good chance of making a full recovery to be released back into the wild, “But, where?” is the question. With this spree of shootings, unless the perpetrator is apprehended soon, the bird’s home territory may be too dangerous to release him back into.
These crimes were committed with a pellet pistol or rifle, modern air-powered weapons that can shoot lead pellets at a potent 1200 feet per second, with accuracy up to 80 yards. Oddly enough, during a search for information on air rifles, we found pellets labeled as Raptor Ammo for the Varmint Hunter rifle by Gamo. Perhaps the user took this too seriously.

Anyone with information on who may have shot these birds is asked to call the Department of Fish and Game at 408-499-8714.

The reward for information leading to the arrest and conviction of the person(s) responsible has increased to $5,180.00. Click HERE to add to it!

We'd also like to encourage you to make a donation to Wildlife Center of Silicon Valley, HERE.

Ah, the power of suggestion. Maybe the user of "raptor" ammo will realize it should shoot pigeons and squirrels instead of shooting a beautiful hawk, or better yet, a target of paper.