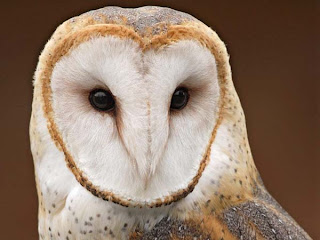 Barn owls are incredible hunters, and it is their exceptional hearing that allows them to find prey so successfully, even in total darkness.

The arrangement of feathers on a barn owl's flat, heart-shaped facial disc helps funnel sound to its ears, which are uniquely positioned. Like humans, a barn owl has ears on each side of its head allowing it to pinpoint sound on the 'horizontal plane'. The left ear, however, is positioned higher on the head than the right, giving the owl a greater sense of the 'vertical plane'.

Check out this video that illustrates the barn owl's unique physique, HERE.

Here are some more interesting facts about barn owls. Barn owls are the most widespread of all owl species, inhabiting every continent except Antarctica. With an impressive wingspan, just shy of 4', barn owls are exceedingly light, weighing less than a pound. Though slight, adult barn owls will usually consume six vole-sized meals in a single night.

Male barn owls are smaller than females and tend to be lighter in color. Females are typically darker, with tawny, coppery-colored chests, flecked with spots. Research suggests these spots are a signal for mates, indicating a female's genetic quality. The larger and more numerous the spots, the healthier the female. Check out this paper on plumage spottiness.
Barn owls tend to be monogamous, and a mated pair will often use the same nest site year after year. Unfortunately, though, barn owls have relatively short lifespans, surviving an average of 2-3 years in the wild. They make up for this, however, by breeding year round and having large broods. Even so, populations are in decline. The reason? Loss of habitat and use of rodenticide.

In suitable habitats where there are open fields, even certain urban environments, barn owls can thrive if provided nest sites. Installing a barn owl nest-box is a simple way of encouraging and supporting a local barn owl population. They are not only beneficial for controlling rodents, watching a family raise their young can be a delight.

WildRescue's directors, Duane and Rebecca, have watched barn owls raise families on their property for years, but something odd happened this week that has them concerned. Rebecca shares their story:
At our home near Elkhorn slough, we have two barn owl nest-boxes that usually produce between two and four baby owls each summer. After they fledge, the young owls remain under the care of their parents for about a month.

Last weekend, the fourth and final owlet fledged from the nest-box nearest our home. Since then, each evening, all four juveniles would fly in from their daytime roosts to gather in their home-tree. From dusk to dawn we could hear them screeching and squawking - begging for food from their attentive parents. One, had a distinctively raspy call. HERE'S what they sounded like.

Thursday night was different, though. It was quieter than usual. It sounded as if there was only one fledgling calling, maybe two. 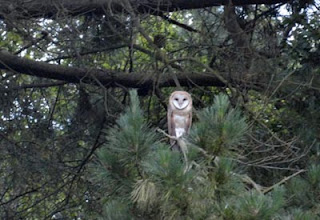 Friday morning, much to our dismay, we found what appeared to be an adult female barn owl, dead in our horse corral. There was no sign of trauma.

Friday night, again, it was quiet - only one fledgling called from the tree.

One of our wildlife responders, Ron, who lives a mile or so away and also had barn owls nesting nearby, witnessed something similar this week.

This evening, the home-tree was silent. However, we did observe a couple of adults nearby.

We're not sure if it is weather related, disease, rodenticide, or something else, but the sudden absence of seemingly healthy birds is a mystery. We are looking in to having pellets from the nest boxes examined for traces of rodenticide.
Stay tuned.