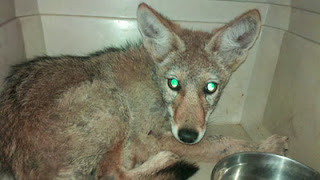 This morning at about 06:30, we were transferred a call from Santa Cruz Animal Care and Control about a coyote pup that had been hit by a car in the hills outside of Watsonville. Tony, the person who initially reported the pup, stood by until we arrived.

The pup appeared dazed but conscious, and it had use of all its limbs, which was a great sign! We immediately transported the pup to Wildlife Center of Silicon Valley in San Jose.

On intake, he presented with signs of internal bleeding, some superficial wounds, but no fractures. See updates below.


The Coyote, one of four canids found in North America, is native to the Western two-thirds of the continent. Today, however, the coyote can be found throughout North America.

Coyotes resemble the German shepherd, but are much slighter in build. They range in size, with western populations being the smallest. In California, an adult coyote stands about 20 inches at the shoulder and weighs 20 to 30 pounds - about as much as a cocker spaniel.

The Eastern coyote, also known as a coywolf, is a hybrid - a mix of coyote and Eastern/red wolf. This 'enhanced model' is bigger, weighing close to 40 pounds, and, like the coyote, is well-suited for survival in anthropogenically modified landscapes.

Like the domestic dog, coyotes are active during the day and during twilight hours, but in urban environments coyotes are mostly nocturnal - an adaptive response, minimizing their encounters with humans and the associated risks.

Coyotes are social animals, living in small pack-like groups of about six individuals. Groups consist of an alpha pair - the dominant male and female, extended family members, yearlings, and young. In addition to resident groups, some coyotes lead solitary lives until they form their own pack or are accepted into an existing one.

Coyotes are capable of reproducing at 10 months of age, however, in coyote society, only the alpha pair produces young. Coyotes are known to be strongly monogamous.

Understanding and respecting the coyote's social structure is key to managing conflicts. When coyotes are observed loitering in a residential neighborhood, or when they're seen taking pets, or pursuing livestock, unfortunately, the most common reaction is to wage all out war - indiscriminately trapping and killing the lot of them.


This is absolutely the wrong answer. Lethal control of carnivores is ineffective in the long run and can be counterproductive - especially when dealing with coyotes. An attack on a coyote clan will, in fact, produce greater problems.

When the alpha pair is destroyed, subordinate members of the pack, that had been kept  'behaviorally sterile', are at liberty to reproduce. Studies show these litters are bigger, with higher birth weights and increased survival rates. With larger than normal litters, the adults are forced to hunt more - increasing the potential for negative encounters with humans.

Through aversion techniques, behavior modification, and responsible husbandry practices, Man can live peaceably alongside the coyote.

This is not to say that there won't be times when removal of an individual is warranted - usually an animal that poses a significant risk and where behavior modification techniques are unsuccessful. This will be an animal that has been 'denatured' - so conditioned to humans (usually through food rewards), that it must be destroyed.

UPDATE ON THE COYOTE PUP:
As of June 29th, the pup is standing and eating well, with a 'fighting personality'.

THANK YOU WILDLIFE CENTER OF SILICON VALLEY FOR YOUR GREAT WORK!!!!

Cheers to the person who called in and stayed with the pup until help arrived. So heart-warming to know there are peope and organizations with big hearts and love for wildlife. Great job everyone!

Not many details on the actual rescue but a lot of discussion regarding the issues. Looks like female pup. They don't weight much. 40-50lbs if they actually can find food. Maybe policy does need an emotional decision point to protect the coyote from humans. Are there many missing dogs and cats in this area? Do the utility poles have an abundance of missing pet fliers? Who protects the average dumb domestic pet from the coyote? Some people want the deer and turkeys protected instead. It is hard to satisfy all contraints, but if you eliminate the food source, the coyotes will go somewhere else.

In the West, coyotes do not weigh that much, even with an abundance of food. Towards the East, they are larger, but still, typically, weigh under 45 pounds. It is the coywolf that can weigh 50 pounds.

It has been shown that in an urban area, where coyotes are left alone, there are fewer cats but a greater abundance and diversity of birds.

As for protecting deer and turkeys, rodents make up the majority of a coyote's diet and studies indicate a low incidence of predation on wild turkeys. Unlike wolves or the hybrid, coywolf, coyotes usually hunt alone or in pairs. Their take of deer is minimal compared to their consumption of rodents.

Complaints about missing pets? The coyotes may be enforcing the leash law.