This week, I decided to start my 'rounds' at Lake El Estero, hoping to find an injured gull I'd seen last week, but all the birds there were in good shape, so I headed for Fisherman's Wharf.

Near the entrance to the wharf, I stood, scanning the water and pilings with my binoculars when a vigorous movement on the rocks below caught my attention. It was a pelican, dripping wet and wildly flapping its wings. It was so drenched it couldn't fly.

Birds are naturally waterproof, and not because of any feather conditioner, but it's actually the structure of a bird's feathers and their alignment (like shingles on a roof) that protects the bird from the elements. Substances, like oil, can cause a bird's feathers to 'collapse', allowing cold water and wind to reach the bird's skin.

This pelican (pictured here) is a good example of what happens - how the feathers clump and part. I suspect the wet one on the rocks is contaminated with 'fish juice'. 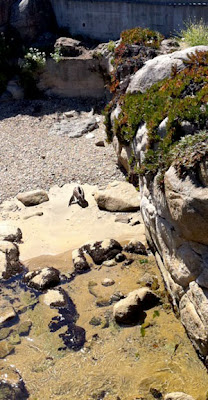 As I was walking to get a better view of the wet pelican, I spotted another one on the beach nearby. This pelican was in much worse condition. It was standing, but had that 'hunched' look - its head was down, eyes closed, facing inland, not the water, and its left wing appeared broken at the wrist. Everything about this bird screamed pain. I knew I needed to focus on capturing this pelican, first. The wet one could wait, for now.

Ashley, the parking enforcement officer, allowed me to park my vehicle inside the closed-off section so I'd have all my rescue gear at hand.

I would try first to lure the bird to me, so I asked a local restaurant owner if they had any fish scraps, and I was quickly handed a beautiful fish that the kitchen had just cleaned and prepared to serve.I cautiously made my way down the incline to within a few feet of the injured bird. As soon as it saw me approach, it took a few steps towards the cliff. I played with the fish, trying to draw his attention, but with no response. I tossed bits of the fish towards him and he turned his back to me. I knelt there for a few minutes, taking in the surroundings and building a new capture plan. 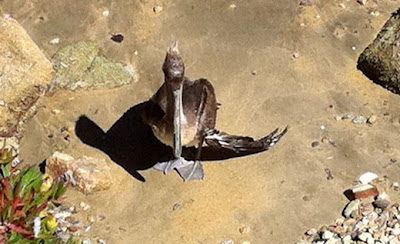 Just to the pelican's left, there was a large rock, about 4 feet tall. I walked over and crouched behind it. If I approached from this direction, the pelican would not be able to see me. I needed my net.

By now, a crowd of about twenty people had gathered along the railing above. As I made my way up the cliff and to my vehicle, several bystanders approached me, asking how they could help. I directed everyone to remain quiet and still, but to keep an eye on the bird while I grabbed my equipment.

I was back on the beach in no time, slinking into position with the rock as my cover. I estimated my net was about 10 feet from the bird. I called up to the crowd and asked them to relay its current position, which they did perfectly.

I took a deep breath, counted to three, and pounced.

As the netting draped over the weakened body of this poor bird, the crowd broke out into applause. As soon as I turned and stood up holding the bird, though, I heard a collective gasp. I looked down - I was covered in blood!

I made my way back up the seawall. Ashley was there, waiting to assist me with the carrier. As we placed the bird into the cage, I saw the wound - a large hole in its abdomen, likely caused by a sea lion. The video, below, shows how this can happen when fish scraps are thrown into the ocean, causing a feeding frenzy.


As I drove the pelican to the wildlife hospital at the Monterey SPCA, I knew the bird would probably be euthanized due to the severity of its injuries, but in my heart I was thankful I'd been in a position to help end its suffering. I was grateful on many levels.

My faith in humanity was reinforced today. I cannot begin to count how many people offered to help - from the restaurant owner giving me fish, to the visitors who helped me over the wall, to the supportive cheers and applause. I may have been alone on the beach, but I felt like I had a team with me. A huge thank you to Ashley who not only allowed me to park on site, but went above and beyond helping me move supplies and the carrier to and from my vehicle.