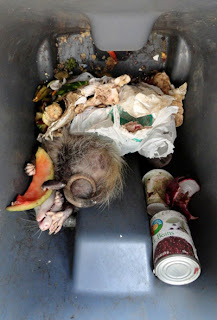 This morning we received a call from a person who had been renting a vacation home in Aptos. He and his family were cleaning up the house and getting ready to leave when they discovered an opossum in the garbage bin. In fact, they had dropped a bag of trash on top of it.

The opossum looked as though it was dying. It might have been trapped in the large container for days, with very little to eat and nothing to drink.


Don't miss the incredible video, below!

The opossum was actually in good shape! The twitching and death throes described by the RP was the opossum just being an opossum - feigning death... but, then maybe it decided to stay in that position for a while. It must have been about 40 minutes from the time the can was tipped to when responders arrived.

The opossum was checked by a local mammal rehabilitator and we released it back to its home that evening at dark.