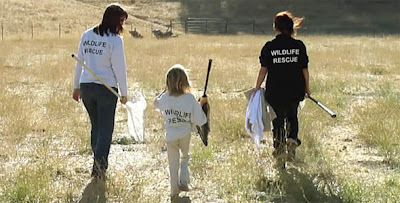 This week we responded to a report of a hawk with an injured wing, found in Gilroy, CA. It was first observed in a field bordering Pacheco Pass Highway. It had probably been struck by a vehicle.

Rebecca was first on scene, followed by Deanna, Chris and their daughter Kaia. Here is their account: 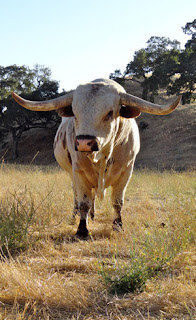 Although it had a damaged wing, the bird was very mobile. By the time we arrived, it had made its way some 200 yards across a field and up a hillside. This is typical behavior for a grounded raptor - to seek high ground or thick cover.

The property where the hawk sought refuge is a Texas longhorn cattle ranch, Bar 46. The owners were very concerned for the bird and kindly escorted us in and through the pastures.

We were approaching the spot where the hawk had been seen last, when it sprang from the hillside some 30 feet away - only to flail in desperation as it plummeted, landing inside a paddock shared by two massive bulls.


We waited quietly. Our mere presence on the far side of the field applied enough pressure to encourage the bird to move on. Within a few minutes the hawk navigated under two barbed wire fences and into the adjacent pasture of dried weeds. 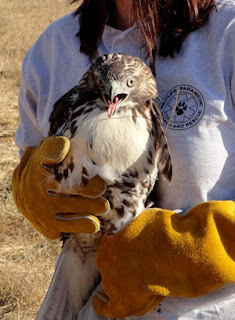 There, we spread out and methodically combed the field.

We finally located the hawk. It was exhausted, but still full of fight.
The hawk was immediately transported to the nearest wildlife rehabilitation center - Wildlife Education and Rehabilitation Center in Morgan Hill, for evaluation and treatment.
The next day we received word that the hawk's wing was too severely damaged to be saved. 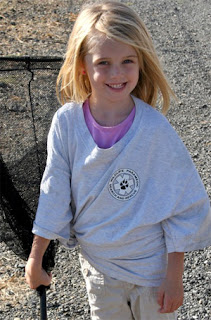 Despite the unfortunate outcome, efforts to help animals in distress are never in vain, particularly when they can inspire others - most especially the young. We were very, very honored to have Kaia join us today - her 6th birthday! We hope it's one she never forgets!

What a great story this is.