Warning: images contained in this post may be disturbing.

Anthropogenic injuries make up the majority of emergencies we respond to. Whether it's a window strike, an entrapment, dog or cat attack - nearly every one of them can be attributed to humankind, in one way or another. This year, however, we documented two unusual fatalities that seem oddly natural. 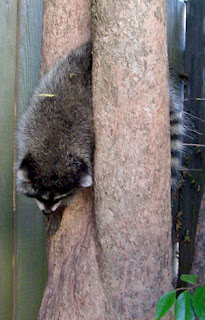 Days after rescuing the little raccoon stuck in the fork of a tree, we received a call describing the exact same situation, only the call came too late - the animal was dead.

In both cases, we believe the youngsters were climbing a multitrunked tree, lost their footing and slipped, just so, and became wedged between the two trunks. As they struggled to get free, their bodies slid deeper and tighter into the groove.

Please take the time to check your yard for these potentially hazardous conditions. If you find such a tree you can attach a piece of wood, horizontally between the two trunks, which will prevent an animal from slipping into the crook. 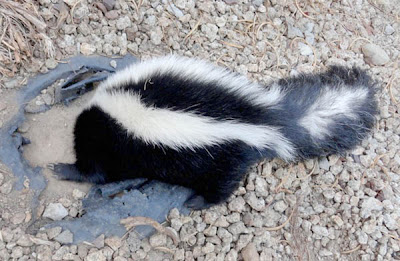 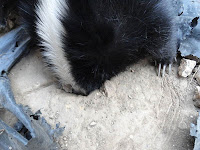 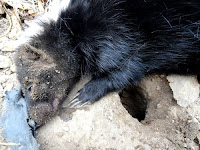 Another bizarre incident involved a skunk with its head caught in a gopher hole.

When it was first reported through our hotline, we were in disbelief. We were sure we'd find some sort of manmade object in the soil, but, no, to our amazement, all we found was rock-solid earth.

Skunks are carnivores and they prey on rodents. The skunk probably poked its head in the gopher hole, looking for a meal.Sadly, we were contacted much to late to save this magnificent creature. It died after an all-night battle to free itself.


Just a reminder to keep our number handy (831-429-2323) and call us immediately if you think an animal is somehow trapped. Better safe than sorry.