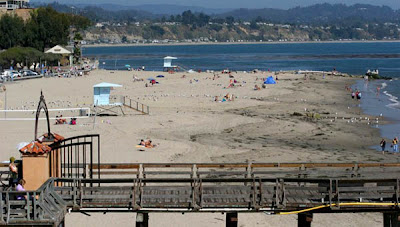 Today, I had to do some errands in Capitola. It's been years since I walked the pier, so I decided to check it out. My plan was to look for sick or injured pelicans, but, as I was driving across the bridge near the entrance to the pier I saw two gulls with fishing entanglements, sitting side by side on the railing  - one had line dangling from its mouth.
Surrounded by heavy traffic and red curbs, I knew by the time I turned around, they'd be gone, so I parked, grabbed my supplies and headed to the beach below the bridge.There were gulls everywhere. There must have been 50 gulls just on one side of the pier. This would be like finding a needle in a haystack, I thought.

After situating my long-handled capture net in the sand I tossed a handful of grain high in the air to get the attention of nearby birds. In no time I was surrounded by squawking gulls. There must have been 40-50 gulls around me, and more flying in. Some were even standing on top of my net! 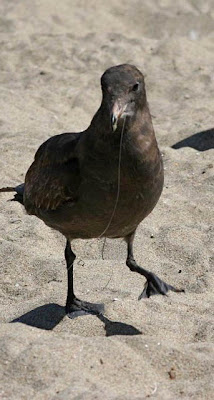 I carefully looked each bird, up and down, looking for line, but they all appeared to be in good shape. I looked towards the sky when each newcomer approached, and soon I saw it - he flew over my head with at least a foot of line trailing behind, glistening in the sun. The bird landed right beside me.

I waited a minute for the surrounding birds to give him some space and when I saw that he was close enough to the hoop of my net, I quickly flipped it up and over him.

I performed a cursory exam to confirm the severity of the entanglement. Tracing the line into the bird's mouth I was shocked by what I found - a treble - 3-pronged barbed fishing hook, piercing the bird's tongue! The hook was so large, it took up the entire oral cavity.

I quickly placed the bird into a carrier and made my way to Native Animal Rescue, just a few minutes down the road.
There, I watched staff use pliers to carefully cut the hook and slowly remove it. The bird was checked for further injuries and none were found. The hook injury appeared to be very recent, so there's a very good chance the bird will be released in a few days.
Looking back, I hadn't planned to bait in gulls on the beach, I was just going to check for pelicans on the pier, but I feel like I was meant to be there today - in the right place at the right time. It feels good knowing that I made a difference, at least in the life of one gull.