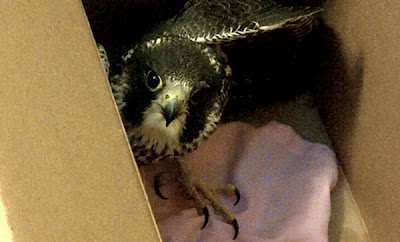 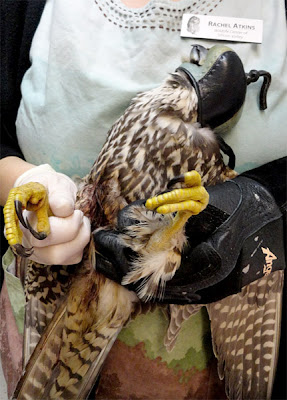 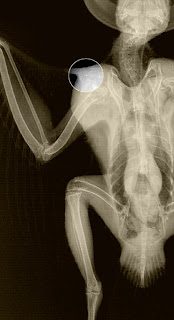 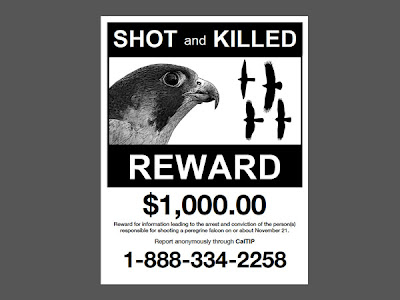 I haven't seen peregrines referred to as 'American' falcons before.

That is a very large juvenile falcon - perhaps a female? She is beautiful - I have high hopes for her recovery.

It's our understanding that the original subspecies of peregrine falcon to inhabit Canada, parts of Alaska and the continental U.S. is the American peregrine falcon (Falco peregrinus anatum). The peregrines found today in the eastern part of the U.S., however, are descended from five subspecies bred in captivity and released as part of the recovery program.

What a beautiful Raptor. I pray that it recovers! Thank you for all you do for all of the wildlife WildRescue takes in..

There are three subspecies of peregrine in North America. The "anatum" or American peregrine falcon of the lower 48 states and parts of Canada; the "pealei" or Peales peregrine falcon of the Aleutian Chain to the Queen Charlotte Islands; and, the "tundrius" or Tundra peregrine falcon found north of the boreal forest. It is true that the eastern U. S. population was restored using breeding stock from all over the world since no members of the original eastern "rock peregrine" remained.

As their numbers increase, we find increasing numbers of peregrines injured, primarily as result of impacts with wires and other obstacles in our cluttered skies. If there are no broken bones, this one has a good chance for a speedy return to the wild. I will speak on the topic of husbandry, handling, and conditioning techniques for peregrine falcons and other raptors during rehabilitation on 1/26 at the Alexander Lindsay Museum. (shameless plug) --Glenn Stewart, UC Santa Cruz.

Wonderful. Thank you for clarifying this, Glenn - and for the announcement of your talk : )
We believe this bird was shot. We'll know more today. We have alerted authorities to the possibility.

Oh! I wonder why I didn't know that 'Anatum' were considered 'American'.. Are 'Rock' peregrines also 'Anatum' or are they a different subspecies? Ya learn something new every day!

I hope whoever did this is caught. This poor beautiful bird deserved to be flying free. Thank you for all you did to help save this magnificent raptor