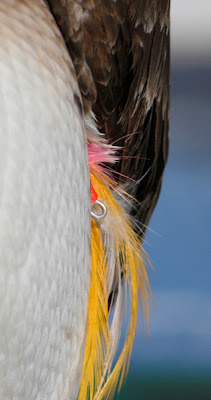 Finally, after weeks without my vehicle (major repairs), I was able to get back to doing my "rounds" after work. I decided to check out the Monterey Fisherman's Wharf to look for injured pelicans. It didn’t take long to spot one.

At one of the fish cleaning stations, I noticed one of several pelicans was sporting a bright yellow and orange feathered fishing lure.

I prepared for a successful capture, placing a bed sheet on the ground a few feet away. I then pulled out a fresh piece of fish I'd brought for baiting-in the birds.

I approached the pelican slowly, applying just enough pressure to encourage it to stand. At the same time, I held out the fillet, jiggling it a bit to entice the bird. It wasn't 30 seconds before it lunged for the fish.

In a series of moves, I grabbed the pelican's bill, guided the bird to the ground, folded its wings, covered its body and head with the bedsheet - all without letting go of its bill. I then lifted the bundle to my hip and headed for my vehicle.

On my way to the SPCA Wildlife Center, I was transferred a call from WildRescue's hotline regarding a weak pelican on Del Monte Beach. I dropped off the first pelican and headed out for the second. 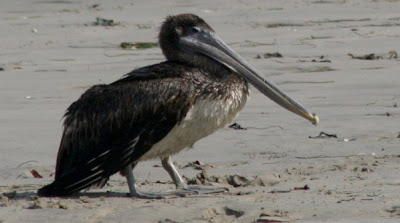 The pelican was easy to spot. It was standing on the shoreline, dripping wet, head hanging down.

A lot of times, a bird in this condition will be too stressed to bait with food, but I took my bag of fillets with me just in case.

The young pelican kept his eyes on me as I approached. I was able to get fairly close. Kneeling down in front of the bird, I tossed some pieces of fish. To my surprise, the pelican showed interest, but as soon as I tried inching closer, perked up and walked away.
Since I wasn’t sure if it could fly or not, I backed off a bit, but kept beside it as it walked slowly down the beach. It stopped, I stopped. We strolled side by side for several yards.
Finally, I knelt down in front of it and tossed some fish again. He closed his eyes. I scooted on my knees, inch by inch, until it was within arm’s reach and then I quickly grabbed his bill. He was wet and cold and covered with pouch lice.
After dropping off the second pelican, I made my way back to the wharf again. There were a couple of pelicans I'd seen at the bait cleaning station that I wanted to get a better look at. 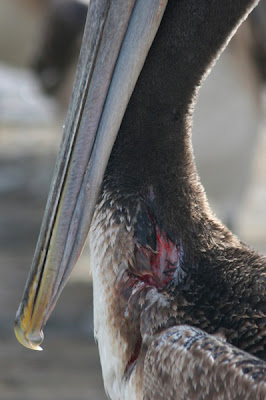 I returned to find a large group of pelicans, about 15 or so. They were anxiously watching as fishermen skinned and cleaned their catch.
Most of the pelicans were standing on the railings, watching the fishermen's hands intently. Others were walking under and around the stations waiting to grab scraps. They were all quite bold, reaching out to try and steal fish from the men’s hands.
I began herding the birds out from under the cleaning sink, which was now dripping with oily fish juice. In the process, I noticed a pelican with a pretty significant injury on its neck.
With his attention on what the fishermen were up to I was able to grab him quickly.
On my third and final trip to the wildlife hospital, the staff jokingly said “Nothing personal, but we don’t want to see you anymore today.”  It was time to head for home.
Even though I had pelican lice crawling on me, the long drive home to Hollister was pleasant. It gave me time to reflect on the rescues. After weeks of being unavailable for rescues, it felt good to be back at it, and to know that I made a difference in the lives of those three birds today. I felt really satisfied.

At home, I cleaned out my car thoroughly then headed inside. When walked in the door I was met with an audible gasp from my husband, "Ugh, what is that smell? Is that fish? Oh, my God... you stink... bad."

It was a good day indeed.

YAY, a hero in every sense! Wildlife is SO fortunate to have you around, Deanna. Much kudos to you and keep up the great work!

Thank you so much for your kind words. I feel fortunate to have met Rebecca and become a part of WildRescue so that I can do what I love.

Thank you, Deanna and all of the WR team!!!! You're my heroes!

Also a huge Thank You! to the SPCA for Monterey County Wildlife Center for administering immediate care to these marine birds, and International Bird Rescue in Cordelia, where most seabirds are transferred for extensive rehabilitation.