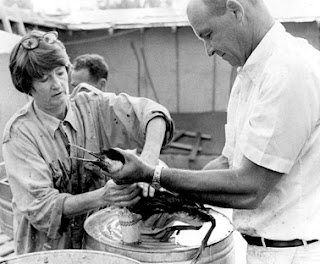 According to Jay Holcomb, current director of International Bird Rescue, the major oil spills off California's coast in 1969 and 1971 were significant milestones in the history of wildlife rehabilitation in the United States.


What happened was, these spills brought like-minded people together - people who were concerned about wildlife and interested in learning how to care for the animals.

As urban sprawl encroached deeper into wild habitats, more and more people were coming into contact with wildlife and finding animals in distress. The Save The Whales campaign marked a significant shift in consciousness that influenced wildlife rehabilitation - instead of seeing wild animals remain in captivity after their convalescence, the public wanted them set free.

After the 1971 Standard Oil Spill, a small group of kindred spirits who had worked together during the spill, including Gary Bogue, Paul Maxwell and Alice Berkner, joined forces to establish an association for those interested in caring for wildlife - a resource for rehabilitators to share their knowledge and receive information on current techniques.

You see, at that time, there were no standards for the rehabilitation of wildlife - most practiced in isolation, with techniques based mostly on trial and error. So, in 1972, the Bay Area Wildlife Rehabilitation Council was formed.

According to Paul Maxwell, former executive director for the Louise A. Boyd Natural Science Museum, it was an informal but serious group of organizations focused on advancing the emerging field of wildlife rehabilitation.

At about the same times as the council was forming, the Louise A. Boyd Natural Science Museum in San Rafael was experiencing growing pangs. Much like the Alexander Lindsey Museum, they were admitting more and more wild patients each year, including seals and sea lions. Animal curator for the museum, Lloyd Smalley, soon realized their wild patients, especially the marine mammals, needed more than what the museum could provide.

After leaving the museum in 1973, Smalley joined up with Paul Maxwell, and Patricia Ariagoni, who had been on the museum's Board of Trustees for seven years. Together, these three paved the way for the establishment of a marine mammal facility in the Marin Headlands. The California Marine Mammal Center, later named The Marine Mammal Center (TMMC), opened its doors officially 1975.


With very little funding, it was the dedication of the Center's volunteers that helped keep the program running - offering up their own cars as rescue vehicles, and adding change to an old coffee can set aside for gas money.

Peigin Barrett began volunteering in 1978. In a recent phone conversation, Peigin recalled the early days and the hardships they had to overcome.


The organization was basically penniless, but everyone rallied together to keep it going. Each weekend we'd  sell donated items at the local flea market so we could get by, and we did.


In 1982, Peigin became the chief executive, but at great personal sacrifice. To make ends meet she held two other jobs - at a bookstore in the evenings, and as caregiver to a retired general on the weekends.

Through the tough times, it was love, she said, that got her through - the love that the people had for the animals.

It wasn't a cutesy type of love, it was a fire of love, and I was lit on fire - that kept me going.

The passion of this early group was the magnet that, over time, brought more people and more funds. Inspired by the Center's work, Charlie Stone and a few others from McPhail's Building Supply and Ghilotti Brothers chipped in to build the first seal pen enclosures.

Today, TMMC is considered one of the largest marine mammal rehabilitation programs in the world. Keep watch HERE for a book on the center's history, The Marine Mammal Center, How It All Began, by Patricia Arrigoni!

After graduating high school in 1969, Jay Holcomb started working at the Marin Humane Society (MHS). The shelter received its share of injured, ill, and orphaned wild animals. Having a strong interest in wildlife, and some experience in hand-rearing orphans as a teen, Holcomb started caring for some species at his home (which was common practice in those days), others were transferred to the Boyd Natural Science Museum which was then under a new name - the Marin Museum of Natural Science.

In 1975, while maintaining his full-time job at MHS, Holcomb started working at the Museum's wildlife center every Sunday. There, his passion for wildlife grew, exponentially, as did his skills as a rehabilitator. A few years later he was hired full-time.

Interested in networking with other rehabilitators, Holcomb started attending meetings held by the newly formed Wildlife Rehabilitation Council. Through these get-togethers, he became acquainted with other Bay Area wildlife enthusiasts, including Alice Berkner...


Return to Part I

I have been involved in animal welfare and wildlife rehab since 1989 and didn't know any of this. What a wonderful read - great thanks to you for writing this history of our area's wildlife rehabilitation beginnings!