Here's Deanna's story of what happened: 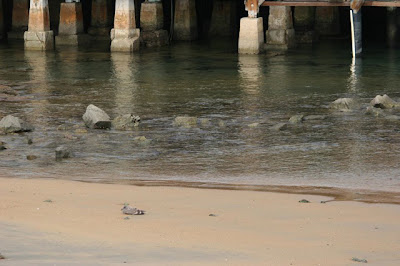 Today, I experienced something amazing - a moment when I "just knew" there was something wrong with an animal even though I couldn't say exactly what it was. Rebecca and Duane talk about this in their wildlife rescue training classes, but I hadn't experienced it until today.
I was on my way to check for injured pelicans on Old Fisherman's Wharf when I briefly glanced over at the beach near the entrance to the pier. Out of the corner of my eye I noticed a gull in the sand, and in a flash I knew something was wrong.

I walked closer and could see other gulls perched on rocks nearby, but this one was resting alone, facing away from the water, and it just had a "look" about it. Something just wasn't right.

I had fish fillets and a bed sheet in case I found a pelican that needed to be captured, so I went back to my vehicle for Fritos and a net, instead.

I walked down onto the little beach where the bird was, and tossed a handful of crumbled Fritos. The gull slowly stood up on one leg and hobbled towards me, holding its left foot out. Pitiful.

I routinely see gulls with leg injuries, and if they seem like they've adapted to the impairment and are otherwise thriving, I leave them be. I'm not sure if there was something else going on besides the leg injury, but this particular gull did not appear to be doing well. He baited-in quickly and was easy to capture. I drove him to the SPCA for Monterey County Wildlife Center for care. 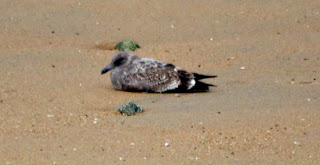 Next month, it will be two years since I met Duane and Rebecca and started volunteering  with WildRescue, and I finally feel like some of the things you just can't teach - the things one has to learn by doing (over and over) - are happening.