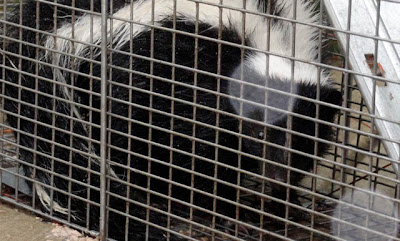 It was pouring down rain when we received a call from a resident in Hollister, CA. The homeowner had trapped a striped skunk that had been in his yard for almost a week - neighborhood dogs had chased it through his side gate.
We advised the caller that we're prohibited from taking the skunk away, too far, but that we would be happy to come get the animal out of his yard and release it within the vicinity come nightfall. It took some convincing, but in the end he agreed.
The poor skunk had been inside the cage trap since about 1:00 AM - completely exposed to the elements. It was cold, wet and frightened. Rescuers transferred the gentle animal into a pet carrier and provided it a nice meal of gopher with sliced pear.
Hours later, under the protective cover of darkness, it was released back into its home neighborhood where it immediately scampered across the street and under a fence. It knew right where it was... home.

You look like the Big Mama Skunk with your black&white motif.
Nice truck!
Do you have to wear polka dots for the rescue of the rare spotted
skunk?